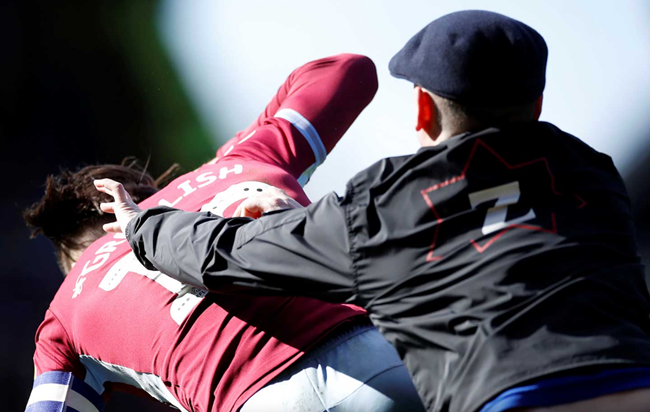 Disgraceful scenes marred the early stages of Sunday’s Birmingham derby after Aston Villa’s young captain Jack Grealish was floored by a cowardly attack from a Birmingham City fan on the pitch.

The fan went storming over the advertising boards and headed straight for the unwitting Grealish, who he then caught with a sucker-punch from behind, knocking the Villa player to the ground.

The bad news is the attack was cheered by a small section of the home crowd. The good news is that the fan responsible was quickly apprehended by the St Andrew’s security team and subsequently arrested.

UPDATE: The fan who ran on to the pitch and attacked Jack Grealish has been arrested. #SSN

Lifetime ban inbound. What a pillock.

UPDATE: The EFL have now waded in with a statement declaring that they wholeheartedly “condone the actions” of the Birmingham fan who clobbered Grealish in such cowardly fashion.

“The EFL condones the mindless actions…”

Beyond satire, this lot. https://t.co/Z30PqlgHTC

We can only assume the word they were actually searching for was “condemn”.

At least we hope it was.

UPDATE #2: Grealish went onto score the winning goal in a 1-0 win for Villa.