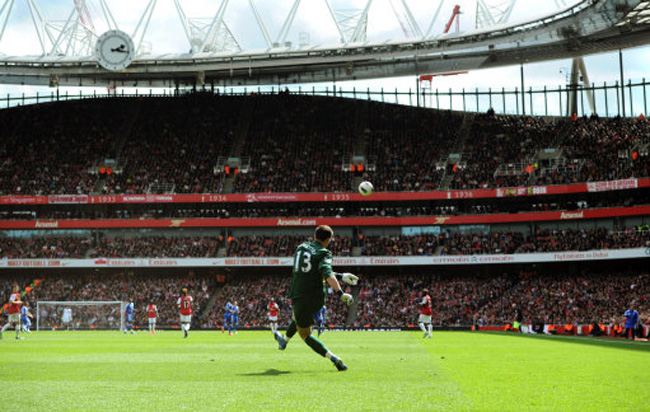 Chelsea came to the Emirates, both buoyed and knackered after their superb 1-0 win against Barca in midweek. However, Arsenal failed to get the better of Roberto Di Matteo’s weakened Blues with Robin Van Persie guilty of a number of poor misses.

The Dutchmen hit the post from point-blank range before missing another couple of good chances in the second-half. Laurent Koscielny, one of the Gunners’ brighter sparks in the metropolitan match-up, also hit the woodwork as the north Londoners, shorn of the crocked Mikel Arteta, failed to get going, particularly in midfield.

Chelsea didn’t do much themselves, although youngster Ryan Bertrand looked tasty at left-back. Oh, and Theo Walcott did his hamstring is out for the rest of the season. Although apparently he should be back for EURO 2012.

While the Blues can look forward to a Nou Camp trip, Arsenal will now be looking over their shoulders at Spurs and Newcastle, having buggered up their five point advantage in the race for third place.