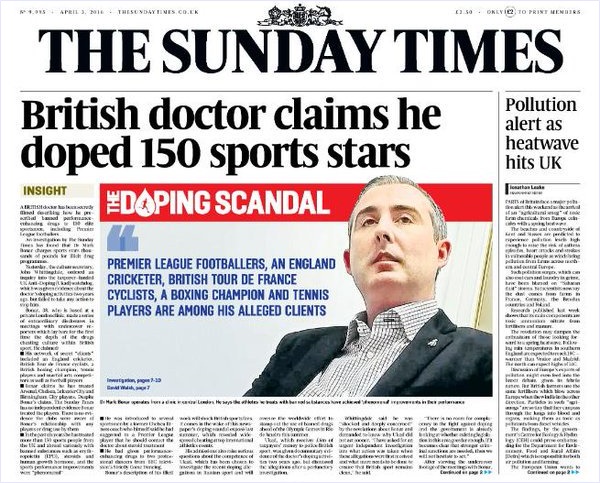 Explosive stuff in the Sunday Times this morning with the paper claiming to have unearthed a potentially major doping scandal that implicates several players and clubs from the Premier League.

Mark Bonar, a London-based private doctor, is at the centre of the allegations, with the Sunday Times claiming to have secretly filmed the 38-year-old medic claiming to have supplied performance-enhancing drug programmes to 150 elite sport stars, including footballers who have played for Arsenal, Chelsea, Leicester City and Birmingham at unspecific times in the past six years.

Arsenal and Chelsea have already moved to deny the allegations, with a spokesman for the former saying: “[Arsenal are] extremely disappointed by the publication of these false claims which are without foundation.”

“The Sunday Times knows that these allegations are baseless but has preferred to publish regardless,” he added.

A spokesperson for the Blues then followed suit by claiming that the club have “never used the services of Dr Bonar” and have “no knowledge or record” of any of their players doing likewise either.

The Sunday Times also report that, according to the General Medical Council, Bonar is currently registered without a licence to practise and is facing an imminent misconduct tribunal (unrelated to doping). Pure professionalism.

Could be something, could be nothing. For what it’s worth, the UK Anti-Doping Agency (Ukad) are currently in the midst of conducting an investigation into the claims.