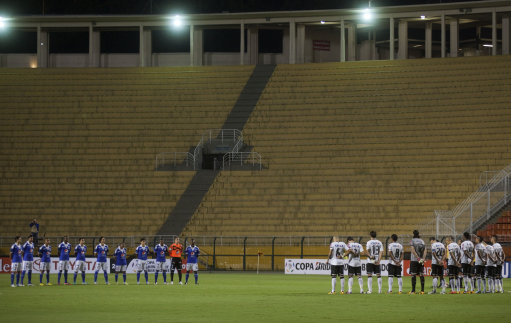 After a 14-year-old football fan, poor Kevin Espada, was tragically killed in the stands when a flare thrown by away fans wedged in his eye during a Copa Libertadores game against San Jose in Bolivia, Corinthians fans were barred from attending the Brazilian club’s next two fixtures – with their subsequent Copa Libertadores tie against Colombian side Millionarios being played behind closed doors in Sao Paulo last Wednesday night.

However, four angry Corinthians fans protested to Conmebol over the “unfair” stadium ban and later claimed in court that they could prove they were nothing to do with the crowd disorder that marred the game.

Amazingly enough, the court ruled in the fan’s favour and the quartet were allowed in to watch Corinthians’ 2-0 victory over Millonarios at the Pacaembu stadium – thus, it is believed  setting an all-time record for the lowest recorded average at a top-level football match (not including games which have been purposefully played without fans).

The court ruling has caused widespread consternation in Brazil, with many Corinthians fans feeling they have been unduly punished for something they weren’t responsible for, with 100 or so fans turning up outside the stadium before the Millionarios game to vent their frustration.