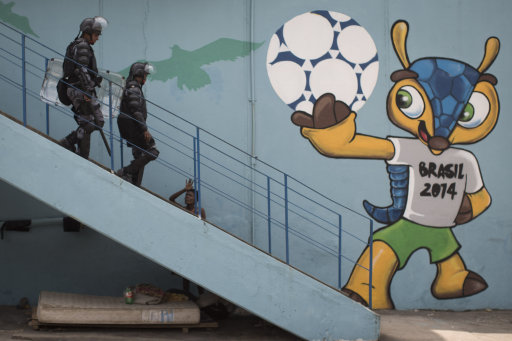 With their double-wide fat seats and prostitutes being given state-funded English lessons, it’s fair to say that Brazil are doing a bang-up job getting their affairs in order for the 2014 World Cup – that’s, of course, if you choose to ignore the fact that none of the budget-blasting stadiums are actually ready yet.

Anyway, last week saw yet another example of how prepared the nation are for their hosting duties when the Brasilia police force cancelled an order for £1.67 million’s worth of police-issue raincoats after double-checking their calendar and realising that the World Cup sits slap, bang in the middle of Brazil’s dry season.

“The military police made a mistake in listing the product among those to be acquired with a view to the World Cup which will be held in the dry season,” said the Federal District government in a statement.

Brazilian media had criticized the plans as an example of wasteful spending by authorities, pointing out that the jackets would have cost a total of 5.35 million reais (£1.67 million).

Rainfall is very rare between May and July in Brasilia and the air humidity often drops to 30 percent.

That’s right, Brasilia police placed an order for 17,000 £100 raincoats to be worn during the driest, most humid months of the year.

Something tells us this World Cup is going to be a blast…predominantly for all the wrong reasons!