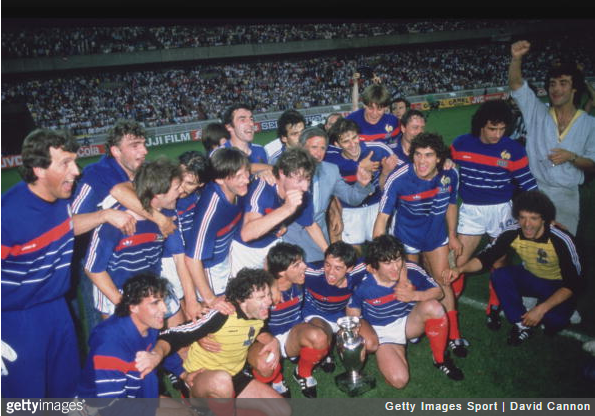 For the 1984 European Championships, further tweaks to the structure were introduced, with UEFA bringing the competition format into line with that of the World Cup finals.

What we ended up with were straight knockout semi-finals for the top two countries from each final group, with the third-place play-off being ditched entirely.

France were chosen as hosts for the final stages, a part of the competition precisely none of the Home nations managed to reach. England missed out by a point to finish second in Group 3 behind Denmark.

Northern Ireland missed out on goal difference to West Germany, Wales finished second in their group, the Republic of Ireland third and Scotland… well, Scotland finished rock bottom of Group 1 after winning just one of their six qualifying games.

The finals pitted hosts France in a strong group with Belgium, Denmark and Yugoslavia.

It was mouthwatering stuff, with the French team boasting a mighty midfield diamond of Michel Platini, Alain Giresse, Luis Fernandez and Jean Tigana.

The rest of the group saw the likes of Enzo Scifo, Nico Claesen, Jan Ceulemans, Michael Laudrup, Allan Simonsen (European Footballer of the Year back in 1977), Frank Arnesen, Morten Olsen, Dragan Stojkovic and Zlatko Vujovic all thrown into the mix for good measure.

The first game set the tone, with France facing Denmark in a thrilling game at the Parc des Princes that the former won 1-0 (Platini can be seen celebrating his goal, above).

However, the encounter was marred by a dreadful tackle that broke Simonsen’s leg before half time and a sly headbutt by France captain Manuel Amoros on Olsen that brought about the former’s dismissal in the 87th minute.

Elsewhere, Scifo inspired Belgium to a 2-0 victory over Yugoslavia in their first game, setting up a potential group decider against France.

A crowd of 51,000 turned up to see France run riot over their next-door neighbours in Nantes, eventually winning 5-0. Coincidentally, Denmark also beat Yugoslavia 5-0 in one of the most thrilling games ever seen at the Championships.

The French then went on to win the group in style courtesy of a Platini hat-trick in the final game against Yugoslavia, with Denmark finishing second thanks to a 3-2 win over Belgium in their final game.

Over in the other group, West Germany, Portugal, Spain and Romania battled it out. All four went into the final games with a good chance of qualifying.

Going into the final round of games, West Germany played Spain and looked all but poised to reach the semi-finals until a 90th-minute winner from Antonio Maceda sent La Roja through at the reigning champs’ expense, and on goal difference too!

The France versus Portugal semi-final in Marseille was a classic. Platini dominated the game and looked to have done enough to ensure victory, but in the 73rd minute Portugal’s Jordao equalised and the game went to extra time. Jordao put Portugal ahead, only for Jean-Francois Domergue to equalise.

With the game heading for penalties, Tigana crossed, Platini fired home and scenes of utter Gallic delirium engulfed the stadium.

The other semi-final was also a game of high quality, with Spain eventually squeezing past Denmark after winning 5-4 on penalties.

In the final, Giresse fired a shot goalwards after just one minute to signal the start of a flowing, end-to-end game. But it was not until the 56th minute that the deadlock was broken, Platini curling home a peach of a free kick – his ninth goal of the tournament.

Then, mere seconds before the final whistle, Bruno Bellone deftly chipped the ball over Spanish ‘keeper Luis Arconada’s head to seal a 2-0 victory for Les Bleus.

1960: In The Beginning There Was The European Nations Cup
1964: England Humiliated, USSR Beaten And Spain Triumph
1968: Italy Edge It As European Championships Come Of Age
1972: Debutantes West Germany Win It At The First Time Of Asking
1976: Panenka Paints His Masterpiece As Czechoslovakia Brush West Germany Aside
1980: Germany Reclaim Their Crown As England Are Disgraced In Turin