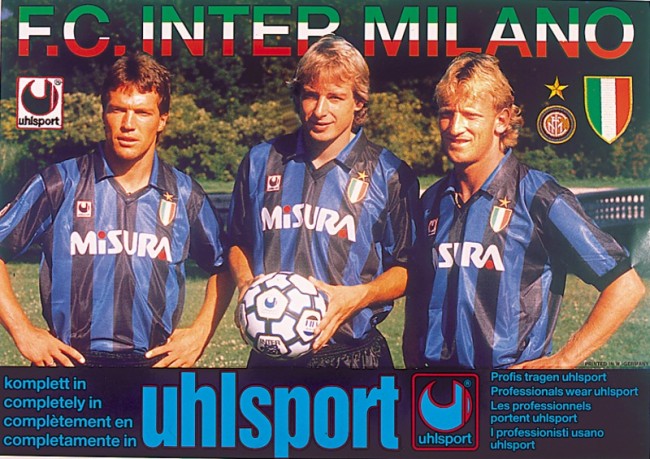 Inter’s Germans – Matthaus, Klinsmann and Brehme – in the Uhlsport kit in the late 1980s

Must seem pretty odd now, in this age of full-on saturation Champions League coverage, but there was a time, back in the 1980s, when you could only catch occasional glimpses of European club football on your TV.

I remember watching BBC’s Sportsnight one Wednesday evening; a 10-minutes-or-so highlights segment of Inter playing at San Siro against Real Madrid in the first leg of their 1985 UEFA Cup semi-final. It was beautiful. The screen’s colour balance seemed to have gone completely off the scale and suddenly, beamed straight into the living room, was this bright, brilliant world, where perma-tanned players strutted their stuff to a backdrop of massed crowds in expensive quilted puffa jackets and sunglasses. And there was a dirty great Martini advert on one of the perimeter fences. Martini. It doesn’t get any more Euro jetset than that.

A couple of years earlier, an Italian neighbour on my suburban South London street had given me an Inter pennant. As a teenage Jam fan, I loved what appeared to be little targets on it (and were actually rather militaristic cockades, worn on the shirts of Coppa Italia victors), while the badge itself, complete with a snake (which was actually the biscione serpent taken from the Visconti family coat of arms) was both strangely exotic and slightly bonkers in equal measure.

When we used to have an after-school game down at the end of the road, I would swap my pennant with a mate’s Anderlecht one before kicking off, just like they did on the telly. European clubs were impossibly glamorous (yes, Anderlecht too), almost an underground, cult thing. Seeing anybody walking about in a Real Madrid shirt, or Juventus, or Brazil even, was a big deal (Richard O’Sullivan, star of mid-80s sitcom stinker Me And My Girl, wore a Barça top in the opening credits. I actually used to look out for the bloody thing – here it is on YouTube)

Inter, Italianised mod targets and snakes aside, also happened to have a fantastically iconic black-and-blue shirt, instantly recognisable and perfect in its classic, symmetrical simplicity. The 1980s model was a beaut, with its Misura ad across the chest (purveyors of fine cracker biscuits) and kept the same precise form throughout most of the decade, only being tweaked with a change in kit manufacturers (Le Coq Sportif in the mid-1980s, then Uhlsport as the decade came to a close). 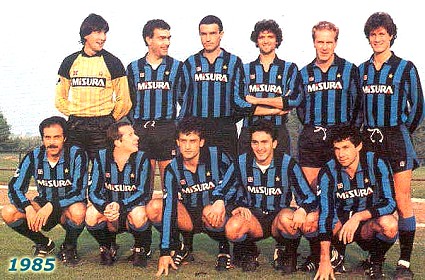 And so what if they never actually seemed to win anything? Alessandro Altobelli wore that shirt. So did Liam Brady (possibly the sole reason for the Beeb deigning to show those highlights), Aldo Serena, Ramon Diaz, Nicola Berti, Beppe Bergomi, Klinsmann…

On a recent San Siro visit, I saw a few interisti sporting the old Uhlsport tops, now reissued as a vintage must-have for the retro market. There it was, catching a bit of early evening Milanese sun, the blue just that bit brighter than recent models, the snake badge still looking cool as can be. I was jolted back a couple of decades, to a time when a replica shirt still had some sort of magical allure, still had this ability to open up little windows on to other worlds.

Matt is an Italian football aficionado who has written brilliantly about calcio for many years, and for many different publications. Follow him on Twitter