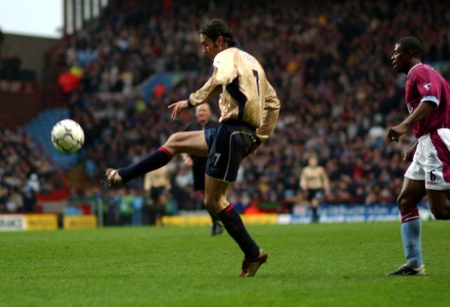 This goal sums up the casual brilliance of Pires. First there is the wrong-footing flick, reminiscent of Gazza’s set-up for his goal against Scotland at Euro ’96, followed by an impudent lobbed finish over the head of none other than Peter Schmeichel, a keeper who had foiled the Gunners in a Man Utd shirt on many occasions.

For all of the thunderous shots that usually make ‘best goal’ lists, I will always find space for goals that make you smile, rather than gasp.

For the record, Arsenal won 2-1 at Villa Park that day, thanks not only to Pires but also David Seaman, who saved a Gareth Barry penalty.