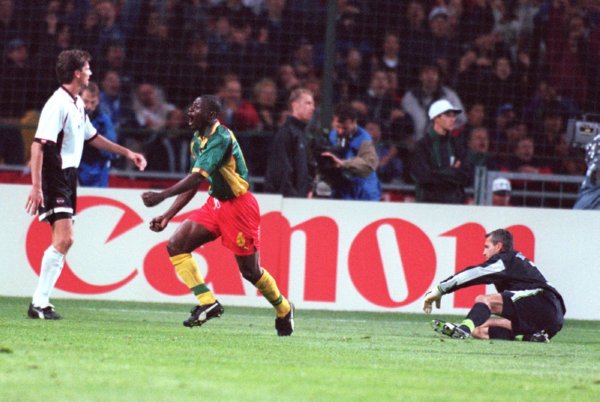 Pierre Njanka-Beyaka was the very definition of a journeyman defender during his playing days, turning out for clubs in his native Cameroon, Switzerland, France, Tunisia, Saudi Arabia and four or five teams in Indonesia before calling it a day, with a three-year stint at RC Strasbourg between 2000 and 2003 being the highest level he ever reached domestically speaking.

Indeed, Njanka’s first season at Strasbourg included a strange anomaly, as the club spent the entire league season in the bottom three before being relegated from Ligue 1 despite winning the Coupe de France!

As for Cameroon; the nomadic full-back won a not-too-shabby 47 caps for his country – scoring two goals over the course of his six-year international career.

Now, the latter of those goals we are sadly unable to vouch for, but Njanka’s first international goal was truly and unforgettably spectacular – coming, as it did, in the Indomitable Lions’ opening group stage game against Austria at France ’98…

Njanka’s beautiful strike was worthy of winning any game but sadly Austria came back to equalise in the 90th minute through Toni Polster (and his hideous curly mullet), the big bloody party pooper!