After serving his eight-game ban for being a devious little shit to the Nth degree, Luis Suarez returned for Liverpool last night and duly picked up where he left off – giving Scott Parker a sly kick in the ribs.

He’s obviously spent the eight games dutifully reassessing his conduct, mulling over lessons learnt and bettering himself as a person. Gah…

Before anyone argues to the contrary, there is absolutely NOTHING accidental about that. Fully fledged and fully intended.

Kick in the gut not doing it for you? How about a wild Alaskan, line-caught sustainably-farmed eye gouge?… 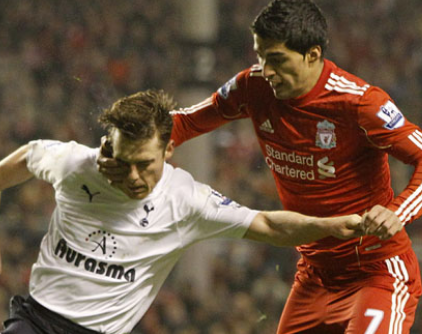 THERE IS NO NEED TO ACT LIKE THIS ON A FOOTBALL PITCH!!

I’d like to state now that I’m by no means anti-Liverpool, just whole-heartedly anti-Suarez. Here’s hoping that the FA see fit to give the little shit another eight games on the sidelines, the feral little swine.

I want him to go and never come back, preferably from some God-forsaken Siberian Gulag.