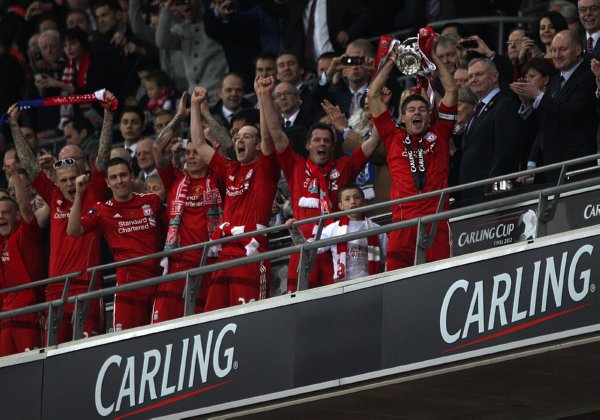 1. First of all, with the North London derby thrown in, what a fantastic day’s worth of football Sunday was. Thoroughly enjoyable for the neutrals!

2. Congratulations are due to Liverpool; they enjoyed most of the meaningful possession and were the better footballing side, though not by much. For all Cardiff’s dedication, discipline and steadfastness, it was the Premier League team that carved out more than enough decent chances to win it in normal time. On another day, it could have been 3 or 4-1 by half-time had opportunities not been lost like tears in rain.

3. Liverpool’s central midfield definitely needs work. Both Charlie Adam and Steven Gerrard sit deep and ping 50-yard balls out for throw-ins in lieu of any central link to the forwards and Jordan Henderson doesn’t seem to know or understand what he’s on there for. Lucas is sorely missed.

4. Tom Heaton, Kevin McNaughton, Alan Hudson and Andrew Taylor all deserve a mention, and Kenny Miller and Joe Mason deserve a nod for the sublime opening goal, but Cardiff centre-half Ben Turner played. Like. A. King.

5. How England’s Stewart Downing won ‘Man of the Match’ I’m not entirely certain. Proof, if proof were needed, that the MotM award is almost completely pointless. Martin Skrtel and all five of the Cardiff defense put in chest-swelling performances over the course of 120 minutes and Dirk Kuyt cameoed for the last 15 and almost won the game for Liverpool on two counts, while Downing conjured up the sum total of diddly for the most part.

7. Malky Mackay reckoned that Cardiff lost “with dignity.” Darned rootin’ tootin’ they did. Despite being out on their feet, they took an established Premier League side to the wire and fell only at the ‘coconut shy’ stage. Nothing to be ashamed of.

8. Kenny Miller will be replaying that chance in his head today and for the rest of the week.

9. Didn’t you just get the feeling that Deadly Dirk was going to score when you saw him emerge on the touchline. Something about that majestic gilded linguine that he calls hair just screamed ‘winner!’.

10. Andy Carroll wasn’t that bad. He got his head on a few things which he had no right to, and brought down two or three hoofed long-balls from the ionosphere that would’ve otherwise gone begging. Yes, he didn’t score, but he didn’t really have a decent chance to do so all game. It’s not like Luis Suarez fared any better.

It’s clear to all and sundry that he’s a header-er not a footer-er. It’s his main/only weapon. Why not stick a few decent, flat balls in at head-height instead of slinging unreachable daisy-cutters five-yards in front of him? *ahem* Stewart Downing *ahem* *ahem*. His movement (or lack thereof) was being chastised by Lawro on commentary yesterday whereas the fact that the service to him was continually unsuitable didn’t seem to be an issue.

11. Many will still jibe Liverpool for celebrating their win so fervently yesterday – it’s ‘only the Carling Cup’ after all – but, while it’s not the most prestigious of trinkets, it can only be beneficial for a club so desperate for success to get a taste of real, free-range, hand-picked and organically reared victory again – if only to get the taste of ‘trading on fading glory’ out of their mouths.