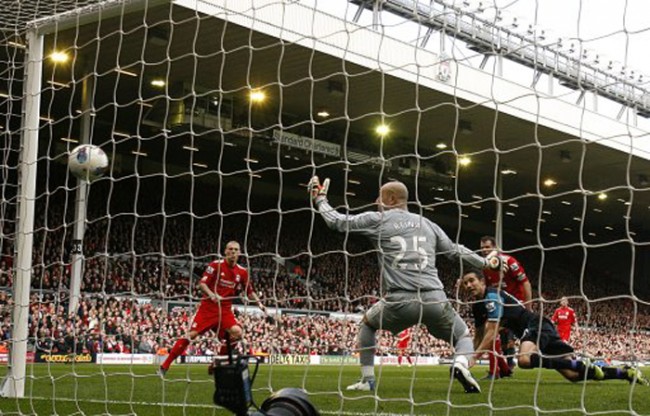 Despite being outplayed for large periods of the early game on Saturday, Arsenal managed to secure a vital win away at Anfield and build on their win against Tottenham last week.

The home side, without the injured England pair of Steven Gerrard and Glen Johnson, started strongly with Luis Suarez making the most of a wide-open Arsenal backline. However, the Reds’ best chance of the first-half came courtesy of a spot-kick after the Uruguayan went down in the box rather theatrically after receiving the faintest of touches from Wojciech Szczesny. However, the Pole saved Dirk Kuyt’s penalty kick before saving superbly again as Kuyt tried to put away the rebound.

The home side kept pushing and, in the 23rd minute, Laurent Koscielny put through his own net from a Jordan Henderson cross to give Liverpool a well-deserved 1-0 lead. Suarez then hit the post soon after as the visitors struggled to get into the game. But then, on the half-hour mark, Bacary Sagna produced a magnificent centre which was duly converted by Robin van Persie from close range. Still, the Gunners could have been behind again soon after, only for Charlie Adam’s flicked effort to come back off the post.

The second half began with Mikel Arteta getting an off-the-ball clatter from Jordan Henderson which left the former Everton man concussed. However, fair play to the Reds’ fans for applauding the Spaniard as he was stretchered off.

Arsenal improved in the second-half, with Abou Diaby making a Lazarus-like return to action with a decent cameo appearance only to be subbed off again with a hamstring injury. Theo Walcott also went close, however, Martin Kelly had a great chance to win the game for Liverpool, only to miscue from a Kuyt cross.

Then, with the game in injury time, Alex Song found Van Persie with a glorious chipped pass and the Dutchman volleyed home, beating Pepe Reina at his near-post and inflicting a damaging defeat on Liverpool.

Arsenal move to within four points of third-place Spurs, while for Liverpool, 10 points lie between them and a top-four berth.