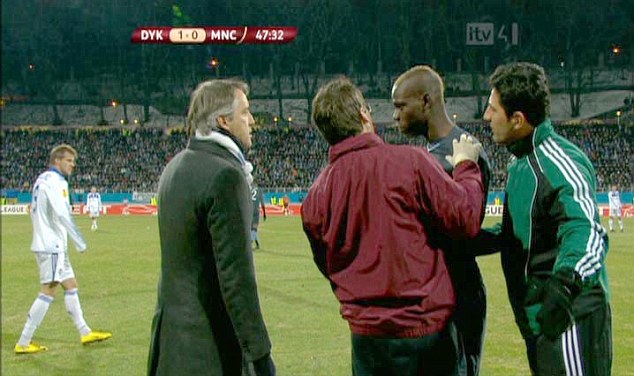 Man City’s Europa League ambitions took a bit of a battering in Ukraine last night, with Roberto Mancini’s side ultimately slipping to a 2-0 defeat at the hands of Dynamo Kyiv in a frozen Lobanovsky Stadium thanks to goals from Andrey Shevchenko and Oleh Gusiev.

With just one notable shot to speak of, the most memorable moment of the night was perhaps provided by City man-child Mario Balotelli, who was substitued just after the interval complaining of an ‘itchy face’.

Balotelli delayed the start of the second half by a couple of minutes by failing to emerge from the tunnel with the rest of the City team, then constantly pulled up to whinge and rub his face during the opening minutes of the restart before eventually making way for Carlos Tevez in the 57th minute.

“Mario had an allergy, I don’t know what, his face was swollen, I don’t know why. He wanted to play in the second half but he had this problem 10 seconds before coming out.

“I came out a minute before the players and I didn’t see Mario. He then said he could play but his face was swollen.”

The cause of our Mario’s little flare-up? Why, a ‘certain kind of grass’ of course.