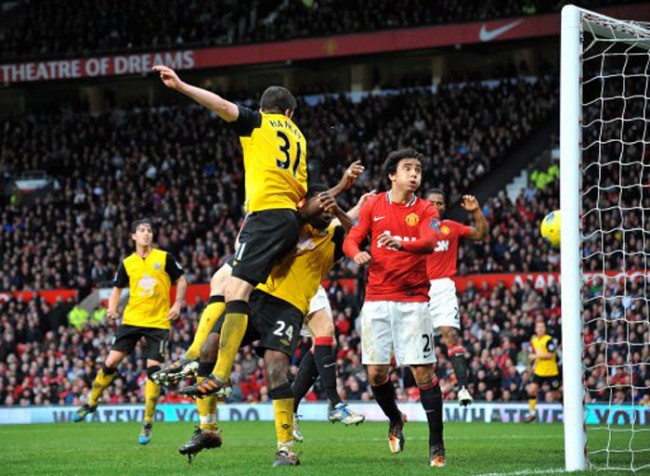 With a starting 11 which included Rafael in midfield and Michael Carrick at centre-half (and without Wayne Rooney), this was never going to be a vintage Manchester United performance. However, even the most pessimistic fan of the Red Devils couldn’t have predicated the finishing scoreline.

Blackburn boss Steve Kean has suffered some appalling abuse from a section of Rovers’ fans this season, but the Scot came to Old Trafford buoyed by his side’s recent draw at Anfield. Indeed, the visitors went at United from the off, and were a goal up after just 16 minutes, when Yakubu scored with a spot-kick after Dimitar Berbatov clumsily pulled Chris Samba’s shirt in the box.

The veteran Nigerian (he must be about 50 by now, never mind what his birth cert says), made it 2-0 to Rovers on 51 minutes after some dismal defending from United, which saw Yakubu breach the Red Devils’ backline far too easily before firing past David De Gea.

Cue the United comeback, with the in-form Dimitar Berabatov bagging a brace to bring the scores level with half-an-hour to play. However, despite playing with a new-found spring in their step, and inspired by the Old Trafford crowd, United couldn’t find a way past Mark Bunn in the Rovers’ goal. Then, with 10 minutes remaining, De Gea flapped at a Blackburn corner and Grant Hanley nodded home the winner.

Kean will no doubt be hoping that the superb result will go some way to silencing the Ewood boo-boys and boo-girls, while Sir Alex, who was celebrating his 70th birthday, will surely be aware that his squad needs strengthening, particularly in the middle of the park. Expectant United fans will no doubt be hoping that Fergie splashes out on another Roy Keane and not another Eric Djemba-Djemba.