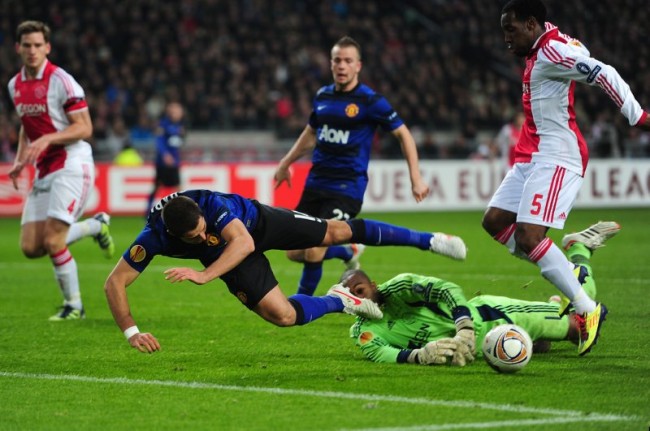 A couple of goals from Javier Hernandez and Ashley Young were enough to see Manchester United run out 2-0 winners over Ajax in their maiden foray into ‘Thursday Night, Channel Five’ football (their first outing in UEFA’s knock-down tournament since 1995) last night – a game that was altogether closer than we had been repeatedly told it was going to be by all and sundry beforehand. That said, a bog-standard win is a bog-standard win.

Both sides went in goalless at half-time after a slightly naff first 45, with Siem de Jong having forced David De Gea into a superb flying save with a swerving 25-yard rifler and Nani providing some craptastic moments of individual craptitude amongst not-very-much else.

The second half was far more open, with Ajax prodding and poking until United finally got the ball rolling on the hour mark, Nani’s cross emerging from a crowd for Ashley Young to steer home after dithering slightly. Hernandez then sealed the deal with five minutes left on the clock; exchanging passes with Wayne Rooney and slotting through Kenneth Vermeer’s legs to make the scoreline a little more comfortable.

One sour note from a United perspective was another injury to Antonio Valencia, who arrived as a substitute in the 76th minute, helped assist Chicharito’s goal and then hobbled off in the 85th minute with a twanged hamstring.

Four weeks on the sidelines is the preliminary diagnosis.