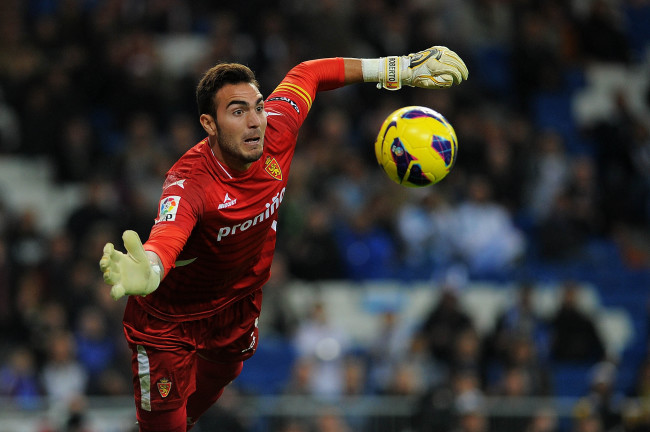 Arsenal are looking to replace Petr Cech. One shabby performance for Arsenal in the Premier League and Arsene Wenger’s seen enough. With Wojciech Szczesny and Emiliano Martinez out on loan, and David Ospina continuing to look like a short-ish accountant, the Daily Star says Wenger will move for Olympiakos goalkeeper Roberto Jimenez (6ft 4inch). Spain’s Marca says Arsenal “have tabled an offer” for the 29-year-old Jimenez, whose contract contains a £.4.3m release clause.

One day on from being told Manchester United have signed Valencia’s 27-year-old centre-back Nicolas Otamendi, and we read that they have not. Sky Sports adds to the news that a Spanish TV station had “seen legal documents confirming that the transfer is about to take place” by quoting an Old Trafford insider: “United are not interested – and never have been interested – in signing the Argentina international”.

According to the London Evening Standard, West Ham United are looking to get a new striker – and with just days left until the transfer window shuts they’ve narrowed their search down to a mere 12 names. Chief mong the dozen are Spurs’s Emmanuel Adebayor, 31, and Manchester United’s Javier Hernandez, 27. Sky says Hernandez is staying at Old Trafford.

Chelsea will nab 19-year-old Fluminense attacker Kenedy for £6.7m. The player’s been granted a work permit, says the Guardian. Expect him to arrive, smile for the camera and go out on loan until he can be sold for a profit.

The Sun says Dwight Gayle won’t accept a £6million move to Bristol City because he wants to stay in the Premier League.

Loyal to the last, Liverpool striker Mario Balotelli, 25, will not leave the Reds in the lurch. The Daily Mirror says the not-so-Super Mario will reject a move to Lazio or Sampdoria because he is due to pocket a six-figure loyalty bonus if he’s still at Anfield when the transfer window closes.