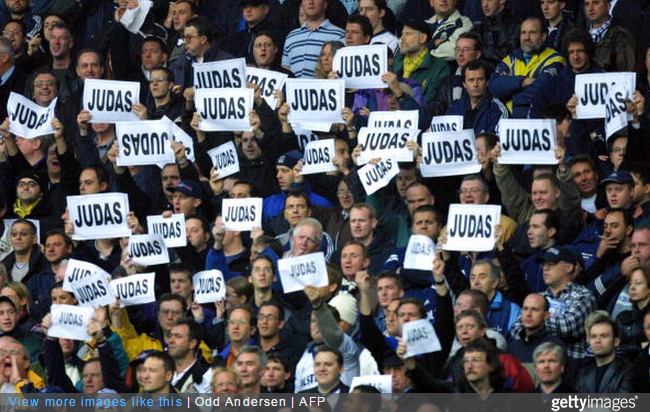 Ince was a popular product of the West Ham youth team, but when the Hammers were relegated in 1989 a move to a top-tier team seemed inevitable.

Irons’ fans may have accepted that, but when pictures emerged of Ince in a Manchester United shirt long before any deal had been agreed, the Hammers weren’t happy.

Ince claimed the pictures had been leaked early – not a great defence – but his name was instantly mud down on Green Street.

Of course, Ince then went on to play for United’s bitter rivals Liverpool, technically making him a double Judas.

Cole cleverly capitalised on the growing dissatisfaction with spoilt, overpaid footballers in 2006 by announcing he’d been left “trembling with anger” by Arsenal’s meagre £55,000-a-week contract offer.

He met with Chelsea reps without telling Arsenal, the club he’d been playing for six years (which led to Cole, Jose Mourinho and Chelsea being fined for their transgressions) before trousering £90,000-a-week to play for the Blues instead.

Tevez has been involved in more than one controversial transfer, but his move across Manchester from United to City in 2009 really ramped up a deep-seated rivalry that had recently been rejigged by a Sheikh-bankrolled City resurgence.

Tevez was hugely popular at Old Trafford but United dawdled over giving him a new contract. When he scored against City, United’s fans urged Alex Ferguson to “Sign him up”.

However, when City eventually swooped, they publicised the deal with a billboard that said ‘Welcome to Manchester’ plonked in the middle of Piccadilly Gardens – winding up United’s fans and Ferguson, who famously branded City “noisy neighbours” and “a small club with a small mentality”.

Figo had been a star for Barcelona for two years before making a then-world record £37million move to Real Madrid in 2000 – thus crossing one of the fiercest divides in world football.

Barca’s fans were appalled. In the first Classico back at the Camp Nou, Figo had to avoid his usual corner-taking duties because of the hail of oranges, bootles, cigarette lighters, mobile phones – and even a pig’s head.

Said pickled pig’s head is currently on show in a museum of Barcelona memorabilia – and yes, it’s still disgusting.

Moving from one side of north London to another rarely works – unless you’re Pat Jennings – but it was the manner of Sol Campbell’s move that really rankled.

Having let his contract run down without discussing a new one, and after months of public statements saying he’d never leave for Arsenal, the man who had captained Spurs for four years did just that in 2001 – leaving Spurs with no central defensive colossus and no money by way of recompense.

Not that Sol is massively delusional or anything (*cough cough*), but he still claims not to understand what the fuss was about.