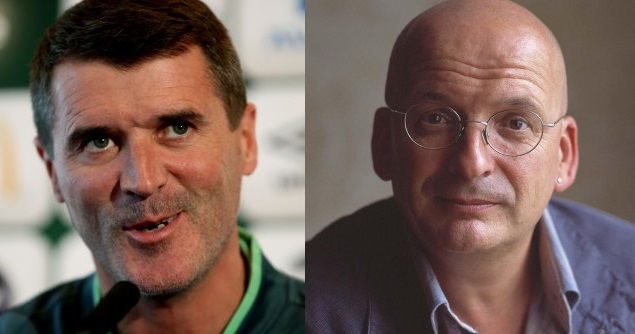 In today’s helping of ‘eh?’ news, it’s been confirmed that Irish novelist Roddy Doyle, author of ‘The Commitments’ and ‘Paddy Clarke Ha Ha Ha’, has signed up to ghost-write Roy Keane’s new memoirs.

According to publishers Orion, the book will “blend memoir and motivational writing in a manner which both disquiets and reassures”.

Keane, who has already released one infamous autobiography back in 2002 (see No.2 on this list for details), has confirmed that the tome is provisionally titled ‘Stick It Up Yer Bollocks: The Diary Of Roy Keane, Aged 42¾…

Alas, sadly that’s not true, we made that up. It’s actually going to be called ‘The Second Half’.

Anyway, Keano himself had this to say:  “I am very happy to be working with Roddy Doyle on this book, and look forward to the experience.”

“Ten years ago I was buying something in a shop in New York and I handed my credit card to the young African man behind the counter.

“He read ‘Bank of Ireland’ on the card, looked at me and said: ‘Ireland – Roy Keane.’ I’m delighted to be writing this book with Roy.”

O…kay, seems like a perfectly legit reason to want to write a book.

It’s scheduled to be published this autumn, in case you were wondering.