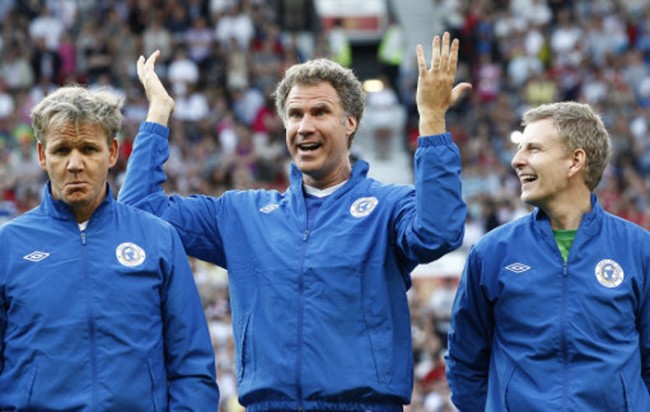 Celebrities from A-List to Z-List were crammed into the hallowed stands of Old Trafford like superstar sardines on Sunday night as the well-meaning yet quite bizarre Soccer Aid came to town.

England, captained by Robbie Williams’ full-time professional mate, Jonathan Wilkes, could call upon the likes of Teddy Sheringham, Graeme Le Saux, Paddy McGuinness and a few chaps from JLS. While their opponents, imaginately called the Rest of the World,  included Clarence Seedorf, Roy Keane, Will Ferrell and Mike Myers (I told you it was bloody bizarre).

Anyway, the beardy guitar playing Italian bloke from Kasabian scored a cracker, beating David Seaman with a fine curling chip (deja vu for Seaman no doubt), before Sheringham, Wilkes and Kevin Phillips won the game for the England side which was managed by Sam Allardyce (Kenny Dalglish was in charge of the Rest of the World).

With Hollywood heavyweights such as Ed Norton, Woody Harrelson and Gerard Butler also taking part, you have to hand it to the organisers. Check out the photos and see who else you can spot as I couldn’t be arsed listing them all for you. And check out the video of Mr. Kasabian’s goal too.

Oh and the real highlight of the game? Surely that was seeing ‘Chef’ Ramsay getting taken out of the game by Sheringham (after Ben Shephard had done the former Rangers starlet earlier in the game). Hurray for charity!