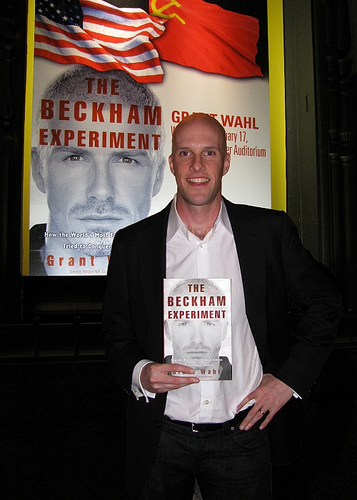 American journo Grant Wahl (he who be responsible for writing ‘The Beckham Experiment’) has outlined his manifesto and joined the running for the FIFA presidency.

Wahl, the senior ‘soccer’ writer over at Sports Illustrated, used an article entitled ‘It’s time for someone to depose Sepp Blatter as FIFA’s leader’ to announce his decision to enter himself as a candidate and plans to go up against incumbent president Blatter when the leadership elections come around this June.

Said the man himself:

“After careful consideration, I have an announcement to make: I’m running for the presidency of FIFA in the election to be held on June 1st. And no, I’m not kidding.

“It gets kind of old hearing the world’s soccer fans complain about Blatter without anyone trying to provide an alter­native. And make no mistake, FIFA needs to change.”

O…kay, and just how does Wahl plan to cure FIFA’s Blatter infection? Well, with anti-Sepp-tic and a manifesto that reads as such:

2. No more limitations of referees per country in the World Cup, to ensure the best – not merely the most diverse – group officiates soccer’s biggest stage. Furthermore, that referees must defend controversial calls to the media following games.

3. Taking off one’s shirt will no longer be a yellow card offense.

4. A woman will serve as the secretary general.

5. All of FIFA’s internal documents will be released to the public ‘WikiLeaks-style’ and an external investigation will be commissioned to hound out the rampant corruption.

6. FIFA presidents, including himself, will be limited to two four-year terms.

With FIFA’s presidency being directly voted for by their member nations,  one member nation must nominate Wahl as a candidate by April 1st (how apt) for him to be deemed eligible.