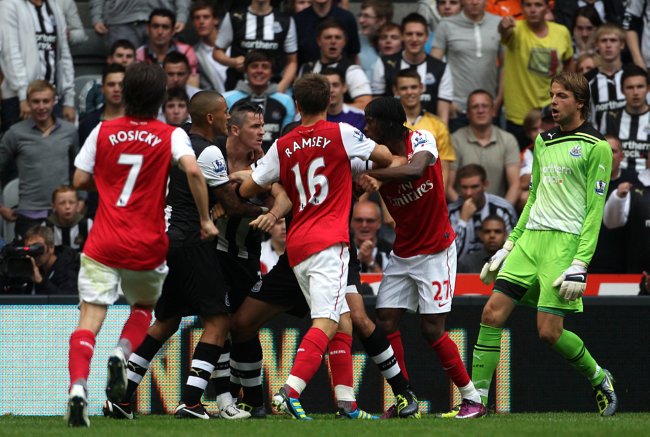 Aside from the fact that he should have been red-carded for a) the preceding dive, and b) the hair, the FA have upheld their charge of ‘violent behaviour’ against Arsenal forward Gervinho for slapping Joey Barton after the Newcastle gobshite hoisted the Ivorian to his feet by his shirt collar at St James’ Park on Saturday.

Yesterday, Arsenal lodged a claim that the standard three-game ban was ‘clearly excessive’ but an FA regulatory commission heard the case earlier today and ruled that the punishment was right and just – releasing the following statement this evening:

“Arsenal’s Gervinho has had his three-match suspension for violent conduct confirmed today, The player was sent off during Arsenal’s fixture against Newcastle United at St James’ Park on Saturday.

“Arsenal subsequently lodged a claim that the standard punishment of three matches was clearly excessive. A commission heard the claim today and dismissed it, meaning the player must serve a three-match suspension with immediate effect.”

Therefore, the mightiest forehead (fivehead?) in the Premier League will now miss games against Liverpool, Manchester United and Swansea.

To be honest, I’ve gone past the point of caring about the ins-and-outs of this debacle. Gervinho, Barton and Steven Taylor all acted like little gits at various points and, as it turns out, two of three have been incredibly lucky in escaping without smacked arses.