Barring the odd canine pitch invasion now and again, the sight of dogs in attendance at professional football matches is largely a thing of the past due to health and safety regulations, etc, etc.

However, there was a time when a man (women weren’t invented back then) could bring his best friend to the game and nobody would bat an eyelid. 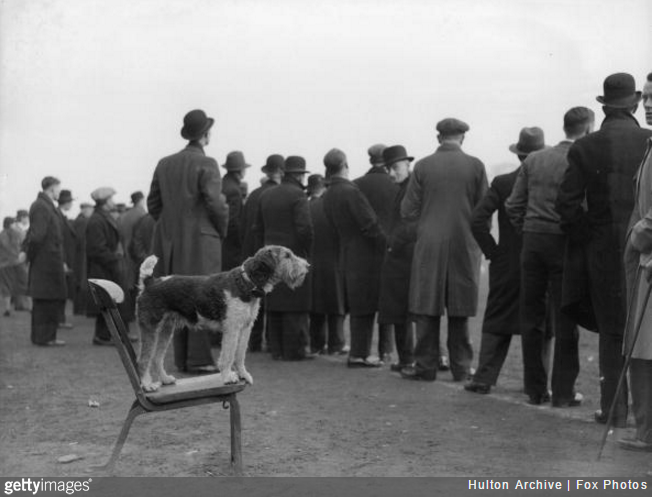 A small dog perches on a chair at Hyde Park in London in order to get a better view of a boys’ football match, 1934

Extra seats are erected on the greyhound track at Eastville stadium ahead of Bristol Rovers’ FA Cup tie against Arsenal, 1936

The dogs (seen lending a hand in the photo) were taken from the kennels and moved elsewhere for the duration of match.

The Arsenal pose for their annual team photo at Highbury alongside their bull-mastiff mascot, the appropriately named ‘Gunner’, 1936

Millwall captain Dave Mangnall limbers up at The Den with his canine coach, 1937

Dressed in his RAF finery, Stanley Matthews takes his daughter and pet hound out for a walk around his local football pitch, 1943

Dundee manager Willie Thornton enjoys a kick-around at an empty Dens Park with his new pet beagle puppy (which we’re reliably informed was given the spectacular name of ‘Acregreen Wakeful’ – or just plain old ‘Bongo’ for short), 1955

A local girl plays football with her dog at Accrington Stanley’s deserted ground shortly after the club went bankrupt and withdrew from the Football League, 1962

England goalkeeper Ron Springett moves quickly to eject a stray dog (seemingly redacted from the photo!) that had meandered out onto the pitch during a World Cup game against Chile, 1962

Ever the spry shot-stopper, Leicester City ‘keeper Gordon Banks goes full length to ‘save’ a dog during a game against Manchester United at Filbert Street, 1965

A timeless image if ever there was one!