At Hampden Park yesterday afternoon, 25 of the 30 Scottish Football League clubs voted that Rangers Newco (the new club stitched together like the Six Million Dollar Man from the few remaining assets of the old, now liquidated club) would be allowed to compete in Division Three in 2012/13.

Anyway, the verdict came through at the same time as the Terry debacle reached its thrilling climax, and the Sky Sports News studio almost collapsed into a schism in the universe as they attempted to frantically bluster their way through both stories simultaneously – though they found time to flash up this interesting little graphic, which shows the average attendance of all the Third Division sides last year… 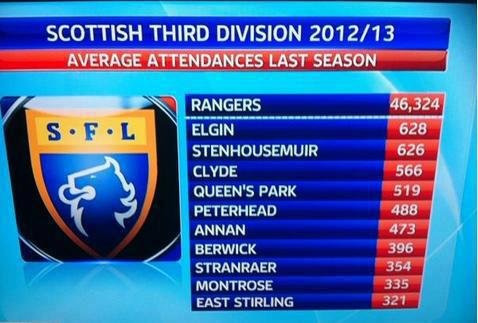 Can you spot the odd one out?

The Daily Record have produced a wonderful, club-by-club stadium guide to help Rangers fans get acquainted with their new opponents, including Berwick Rangers’ wonderful Shielfield Park (a ground I’m glad to say I’ve actually visited in my time) which is heavily sloped and features a dirty great dirt track around the outside of the pitch, being as they share it with the Berwick Bandits speedway team.