After publicising the serialisation of a book telling the inside story of the collapse of Rangers FC, the Scottish Sun has now done a major about-turn and decided to drop the feature after their switchboard was inundated with complaints from angry Rangers fans.

Phil Mac Giolla Bhain, the writer of the book, entitled “Downfall – How Rangers FC Self-destructed”, was a well-respected journo who had managed to get very close to the shenanigans behind the financial disaster at Ibrox. The Scottish Sun saw the potential in serialising the book, but the level of anger aimed at the paper and Mac Giolla Bhain as soon as the serialisation was publicised, seemed to shock the powers-that-be at the Sun. 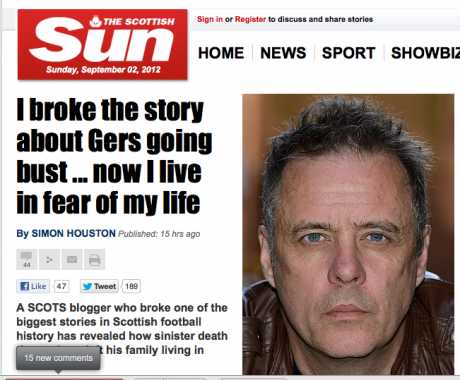 Rather than ride the storm, the Scottish Sun promptly decided to pull the whole serialisation, claiming that they had done so after reading one of Mac Giolla Bhain’s blogs, which they claimed was overly offensive and sectarian. The blog in question, which you can read here, is a rather broad satirical piece on the bigotry surrounding a section of Rangers’ fans, not something really relevant to the publishing of the book. However, for the Sun big-wigs, it seems to have been a handy excuse for dropping the book.

Explaining their decision to drop the book, the Scottish Sun published a leader which said:

“Phil Mac Giolla Bhain is not one of our journalists and his blog undermines the entire industry. THAT is why we have decided not to carry the serialisation of the book. NOT because of the social media backlash. NOT because of the internet bullies. But because the author — previously unbeknown to us — is tarred with a sickening sectarian brush.”

Mac Giolla Bhain himself, as well as the Scottish sun writer who interviewed him for the initial publicity piece, have found themselves the target of serious threats from Rangers’ fans (I’m sure the Irishness of his name hasn’t helped either) and he is extremely angry at the situation. He said:

“I think this is a dark day for journalism in Scotland when a major title can be forced into self-censoring in this fashion.

“The most worrying aspect of this are the threats aimed at Simon Houston who interviewed me. An attack on a journalist is an attack on journalism and, ipso facto, an attack on democracy.”

Not a good day for the Scottish Sun, I think.