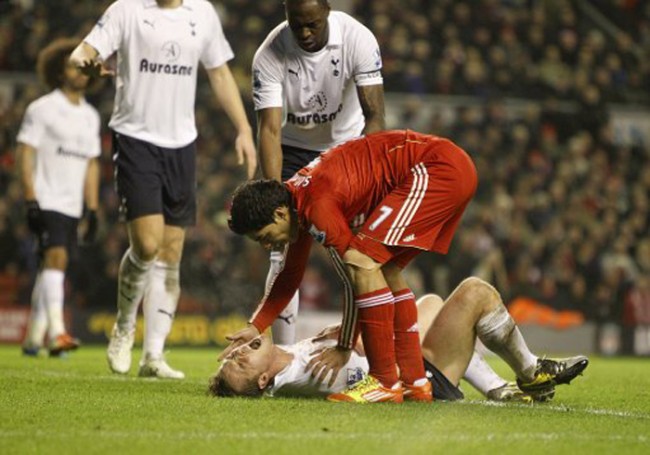 The Premier League’s enfant terrible, Luis Suarez, made a return to action last night after serving his eight-game ban, but even the gifted Uruguayan couldn’t kickstart what was a rather flat performance from Liverpool at Anfield.

Visitors Tottenham came into the game six points behind second-place Man Utd, but failed to find the attacking spark which has served them so well this season. Instead it was their backline who produced an impressive and disciplined display.

Another man of the moment, Harry Redknapp, was absent for the game after his flight from London was cancelled due to bad weather, but the not-at-all dodgy Spurs boss missed little in the way of goalmouth action in the first-half.

Early in the second half, Gareth Bale was booked for diving for the second time this season, as the Reds started to push for a goal, with Martin Kelly going close. Dirk Kuyt made way for Suarez on 66 minutes, but the South American’s first act was to aim at kick at Scott Parker which earned the striker a yellow when he really deserved a red.

Andy Carroll then fluffed a decent opportunity to win the game for the home side although it was Bale who had the best chance of the game late on, running through on goal but failing to beat Pepe Reina.

A point was of limited use to both sides, with the Reds chalking up their eighth home draw of the campaign.