Tottenham Hotspur confirmed on their official website that planning application for a new 56,000-seat stadium has been submitted to Haringey Council. The club outlined the main features of the proposed development with the following bullet points:

• Inclusion of new 63 row single-tier stand responds to Club desire to create the most atmospheric stadium in Europe
• Planning application lodged with Haringey Council for a world-class stadium, public square, hotel, supermarket, homes and space for the Tottenham Hotspur Foundation
• Delivered on the current site and adjacent land, ending concerns about a move out of the Borough with no need for even a temporary move during construction
• Major investment into North Tottenham to provide a huge boost to the area
• A flagship for the wider regeneration of the area

As the first bullet reveals, the ground’s design incorporates a single-tier stand – like The Kop at Anfield. That’s great news for Spurs fans – I’m a big fan of single-tier stands, as they really do allow fans to feel like part of a whole section of fans (multi-tiered stands fragment fans), not to mention offering a great view of the pitch.

The new stadium, which will probably be named after a big-money sponsor (hey, I like ‘Naming Rights Stadium’) – like Arsenal’s Emirates Stadium – will be built adjacent to White Hart Lane, where the team will continue to play during construction. The site also includes 434 new homes, a 150-room hotel and a supermarket, all of which will contribute to the regeneration of an area of north London that badly needs a facelift.

Tottenham’s website has more info, while you can check out a gallery of the project below. Gotta say, the Kop-like stand looks terrific: 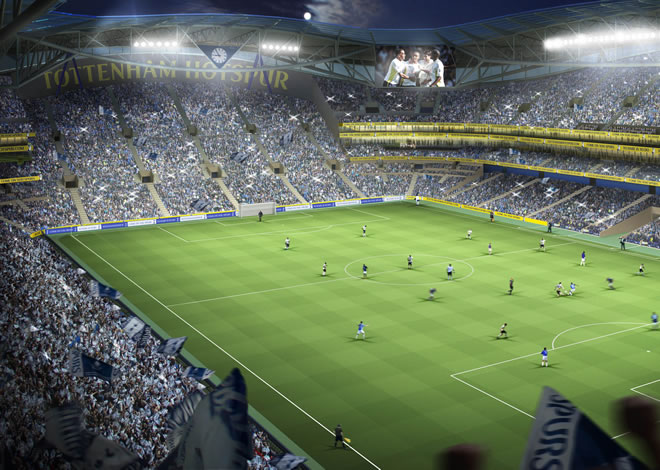