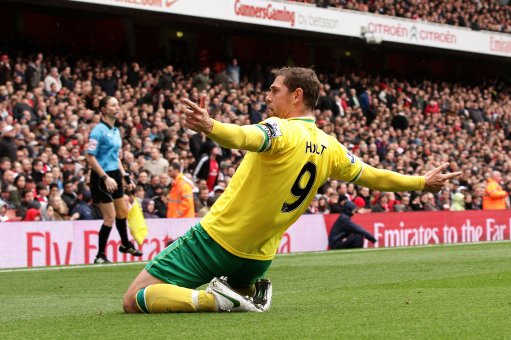 Norwich City have enjoyed a superb first season back in the top tier, thanks in part to the goalscoring heroics of their player of the year Grant Holt, a player who not so long ago was plying his trade in League Two. The 31-year-old has bagged 15 Premier League goals this season, a superb tally for a top tier debutante. However, after that sole season in the top flight, Holt has decided that the he is too good for the Canaries, duly handing in a transfer request at Carrow Road.

The request was instantly denied by the powers that be at Norwich, but one wonders whether big Holty is getting a little ahead of himself by signalling his intentions to leave the Canaries after a single Premier League campaign? After all, there are plenty of players who have enjoyed one good season in the top flight before fading out of the spotlight all too quickly (see Marcus Stewart).

Interestingly, most media outlets are reporting that Holt’s request had not come after an offer from another club, so it may simply be a case of his agent playing silly buggers. Also, the rumours linking manager Paul Lambert to the Liverpool (or Aston Villa) vacancy may have had a bearing on Holt’s decision. Still, one wonders how many bigger clubs than Norwich would be willing to take a punt on a player in his early thirties with just one season under belt? Or will we see a Lambert/Holt move to Anfield!!!?

Stay where you are Holty, the grass isn’t always greener on the other side!