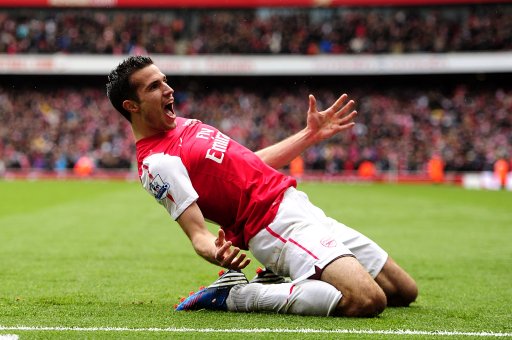 In news that most Gooners were dreading, their beloved captain RVP decided not to renew his contract with the north Londoners. The Dutch striker released the following statement on his own website:

“This is an update for the fans about my current situation. I have kept quiet all this time out of respect and loyalty for the club and as agreed with Mr. Gazidis and Mr. Wenger, but since there is so much speculation in the media, I think it is fair for you guys to know what’s really going on at the moment.

As announced earlier this year I had a meeting with the Boss and Mr. Gazidis after the season. This was a meeting about the club’s future strategy and their policy. Financial terms or a contract have not been discussed, since that is not my priority at all.

I personally have had a great season but my goal has been to win trophies with the team and to bring the club back to its glory days. Out of my huge respect for Mr. Wenger, the players and the fans I don’t want to go into any details, but unfortunately in this meeting it has again become clear to me that we in many aspects disagree on the way Arsenal FC should move forward.

I’ve thought long and hard about it, but I have decided not to extend my contract. You guys, the fans, have of course the right to disagree with my view and decision and I will always respect your opinions.

I love the club and the fans, no matter what happens. I have grown up and became a man during my time with Arsenal FC. Everybody at the club and the fans have always supported me over the years and I have always given my all (and more) on and off the pitch. I am very proud of being part of this fantastic club for the last 8 years. As soon as Mr. Gazidis is back from his 2-week holiday in America further meetings will follow and I will update you if and when there are more developments.”

So there you have it, quite a damning judgement on Arsene Wenger and co., to be honest.

Apparently, the Gunners themselves weren’t expecting such a statement from their captain, and eventually released a rather bland one of their own:

“  We have to respect Robin’s decision not to renew his contract. Robin has one year to run on his current contract and we are confident that he will fulfil his commitments to the Club.

“We are planning with ambition and confidence for next season with Arsenal’s best interests in mind.”

Now, let’s face it, Van Persie is 28 and this will probably be his last chance for a big move to a bigger club, so I don’t think too many Arsenal fans will be angered by that simple fact. However, on the other hand, this is a player who, before last season, had spent much of his time plagued by injury. Therefore, you could say that it’s a bit cheeky for RVP to feck off after one proper decent season for Arsenal. Finally, after losing Cesc Fabregas last season, Gooners won’t be happy by the fact that yet another captain and star player is leaving.

Looking at the statement from Arsenal, they may well be planning to keep their Dutch star for the remaining year of his contract. However, it might be wiser to cash in on their prize possession now, with the likes of Manchester City and Real Madrid sniffing about. Also, going on his career so far, the odds of Van Persie going another season free from injury are slim.

Anyway, with Olivier Giroud and Lukas Podolski already brought in as replacements up front, Wenger could do worse than cash in his Dutch chips and bolster his defence with a shiny new signing or two, and maybe even bring in a new goalkeeper. After all, last season scoring goals wasn’t the issue for the Gunners, it was keeping them out at the other end.