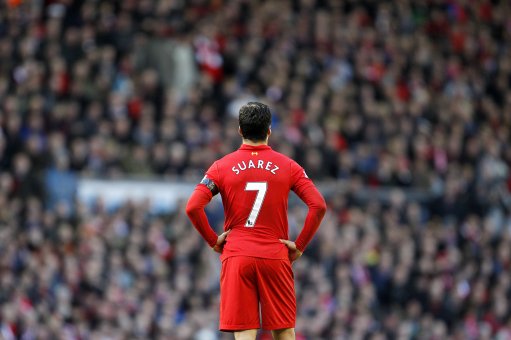 Down at the end of Lonely Street

Luis Suarez wants to leave Liverpool because he is better than them. He knows he’s able to play a much higher level than “upper mid-table” and would like to do so. He wants to play for Real Madrid.

All this is fine and too be expected of a man who is clearly an entire strata of talent better than almost all of his teammates. However, Suarez is also keen to engineer himself an “out” at Anfield as he wishes to leave with the fans on his side.

Therefore, Suarez has chosen to peddle the stupefyingly ironic line that he is being harassed out of the country by the nation’s media, who have, in his own words, “never judged him for his play” but rather on “his attitude”.

Strange that they’d focus on the attitude of a man found guilty of racist abuse, biting an opponent and multiple other absences of basic sporting dignity.

“Ever since I arrived I have felt bad, they have never judged me for my play but with the attitude that he dives, protests, makes gestures, racism… everything.

“They have never spoken well of me. For that reason, when I was told I could win the Player of the Year award, I said: “I will not get excited as I know that I will never win an important award in England.”

“Without any proof they gave me an eight match ban, but with Terry, where they had proof, lip-readers, they gave him four, I’m South American and I think that’s the root of all of this.”

“Liverpool is a club that I dreamt about playing for as a boy. I have been with great players there, they know me and I would love to continue for many more years at Liverpool. The stadium is spectacular, the fans are phenomenal: people with tattoos of me, things that I could never have imagined.

“After the [Evra] suspension people would come up to me, this is something that really touched me and they would say: “Luis forget everything and stay.”

“But I can’t forget as it was something that I had to suffer, that my family had to suffer and away from football I have a family to support and who are hurt by these things. “

“About a week ago I was walking in a shopping centre near Manchester and three or four guys asked me for a photo.”

“While we were posing for it my wife said to me “Luis, get out of the photo”. She noticed they were making biting gestures. I was with my wife and my daughter. Things like that get on your nerves.

“My wife was on the brink of tears and the blokes ran off laughing. You get tired of stuff like that.”

Oh, I dunno…maybe stop biting other human beings then?

Christ! If he truly believes he is the victim in all this, then the kind of metal gymnastics he’s had to perform to reach that conclusion are utterly baffling and actually perversely impressive too.

Firstly Luis, we’re fairly sure that the Spanish media are every bit as critical and judgmental as their English counterparts so best of luck on that front and, secondly, can you not see why an outsider looking in may choose to judge a convicted racist biter who has been banned for a total of 18 games in the space of his two-and-a-half years in England on his character from time to time?

You made yourself the story. You have no-one to blame but yourself. If you want to leave, at least have the dignity to do it quietly.