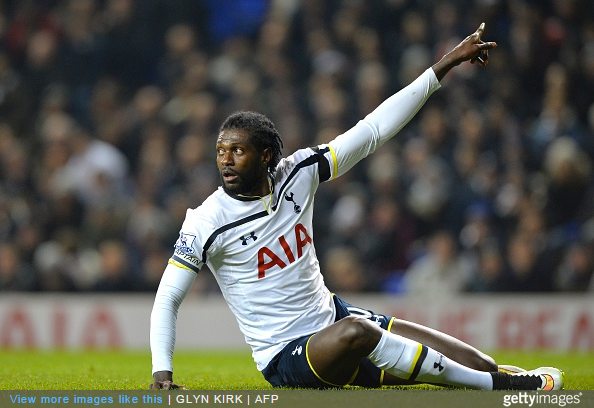 As a measure of just how dull yesterday’s transfer deadline was, the biggest stories were all generated by players who didn’t actually go anywhere.

Emmanuel Adebayor was one of those players, with the Togolese striker ending the window at Tottenham despite being cut adrift from the first team entirely this season.

With Aston Villa and West Ham reportedly interested, Spurs offered to cancel Adebayor’s contract to allow him to move. However, Adebayor demanded the club pay up the remaining year of his £100,000-a-week deal first, supposedly to the tune of £5million.

Unsurprisingly, Spurs refused and here we are: a good old fashioned, entirely-detrimental-to-everybody-involved impasse.

But it would seem that the money wasn’t the be all and end all of it.

According to the Telegraph, Adebayor actually refused to leave Spurs on the advice of his pastor.

The future of Adebayor has been one of the sagas of the summer and Telegraph Sport can reveal that he not only demanded huge money to leave Spurs, but also pulled out of a move to Aston Villa because he claimed he needed a sign from God.

The 31-year-old had been close to joining Aston Villa at the end of July, but stunned Villa officials when, having completed a medical and posed for pictures in the club’s shirt, he stalled on the deal by claiming that he wanted a sign from God that it would be the correct move.

Adebayor is understood to have then consulted his pastor over the prospect of moving to the Midlands before finally deciding against the switch, much to the frustration of Villa manager Tim Sherwood.

The lengths some people will go to avoid playing for Villa, eh?