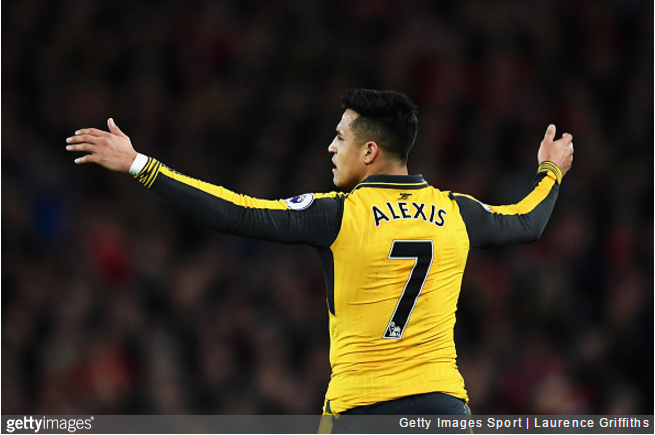 Not that it took a wild leap of imagination to guess, but it has emerged Alexis Sanchez was dropped from Arsenal’s starting line-up for their match against Liverpool as punishment for storming out of a training session in midweek.

According to David Hytner in the Guardian, Wenger decided to start with Sanchez on the bench after the Chilean instigated a “dressing-room slanging match” with some of his teammates.

Sanchez stunned his team-mates by walking out of the session and, when they returned to the changing rooms to find him, there were angry words between some of them and him.

The flashpoint is believed to have kicked off after an incident with another player.

Wenger quickly relinquished when Arsenal came in at half-time trailing by two goals to nil. Sanchez was sent on for the second half and the Chilean duly provided the assist for Danny Welbeck’s consolation goal in what proved to be a predictably flaccid 3-1 defeat for the Gunners.

It’s also being reported that Wenger was planning to drop Mesut Ozil for the game too, though the German was instead ruled out through illness.

Speaking after the final whistle, Wenger defiantly stood by his decision to remove the only semblance of tenacious fighting spirit from his team for such a big match.

I don’t deny Alexis Sánchez is a great player. A decision like that is not easy to make. You have to stand up for it.

I wanted to play two players who were strong in the air (Welbeck and Olivier Giroud) and then bring Sanchez on in the second half.

All a bit cack-handed really, wasn’t it Arsene?

This all comes after several weeks of mini-tantrums from Sanchez, who seems to be the only Arsenal employee even remotely visibly concerned by the club’s meek, traditional slide into late-season capitulation.

If he didn’t already have one foot out of the door at the Emirates, he’s practically warming up the car now.