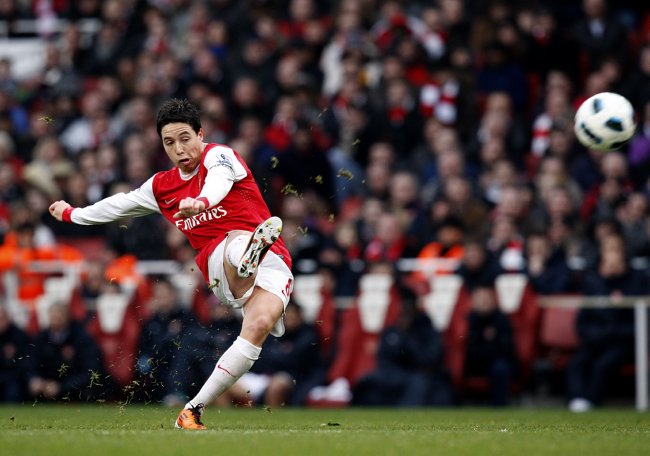 According to the man himself, Samir Nasri’s imminent move to Manchester City is ‘nearly done’ and that the Frenchman will be leaving the club with a sense of ‘anger and bitterness’ after understandably taking being repeatedly called a ‘c*nt’ by the Arsenal fans at Newcastle on Saturday as a personal slight.

Nasri has posted the following update on his Facebook page:

“It’s nearly done. I will leave with bitterness and anger in my heart. I am proud for having played with the Gunners.

“I have been very disappointed by the supporters last weekend. I am still an Arsenal player but I will leave very soon.”

The general consensus is that a £23 million fee has been agreed and that Nasri is now quibbling over the last few details of a £165,000-a-week contract with City execs – with the deal expected to go through before the weekend.

With Cesc and Samir now dust in the wind, Arsenal are obviously keen to hire a replacement or two and it seems (according to L’Equipe) that Arsene Wenger is going to use his ‘Fabregasri’ moolah to raid Lille for the second time this summer and fund a move for their prodigious Belgian, Eden Hazard, though the French club have slapped a fairly hefty €30 million (£26 million) price tag on his head to supposedly ward off interest.

The money’s obviously available, but the question remains: are we ever going to see Arsene shell out that much on one player? Surely, if he’s ever going to break the habit of a lifetime, now is the time?

“Just to make things clear I don’t have a Facebook so I never said I was leaving with bitterness. The guy who said that used a fake account.”

Though, of course, he hasn’t moved to dispell the rumblings that a switch to City is nigh.