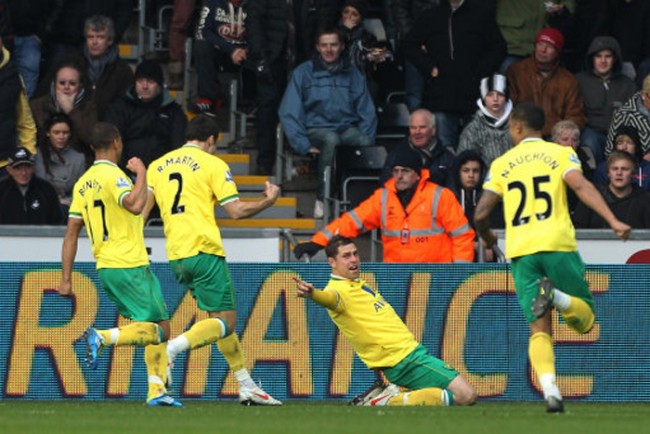 An 18-minute second-half goal-spree secured all three points for the Canaries at the Liberty Stadium on Saturday in a superbly entertaining battle of the Premier League new-boys.

Danny Graham, surely on the cusp of an England call-up, netted a brace for the Swans, with his first coming on 23 minutes after good work from Nathan Dyer. Graham’s second came very late in the game, but sandwiched between his two strikes were three goals from a Norwich side who were in rampant form after the break.

Grant Holt, another English strike in superb form, was the star of the show for Norwich, netting a brace in that second-half comeback, with Anthony Pilkington, surely near a call-up for the Republic of Ireland senior side, also finding the back of the net.

Graham had a chance late on to secure a point for the home side and register a hat-trick, only for the striker to fluff his lines when presented with a clear-cut chance to score.

Paul Lambert’s side move to eighth in the table while Brendan Rodgers’ Swans, after suffering only their second home league defeat of the season, take 11th spot in the rankings.