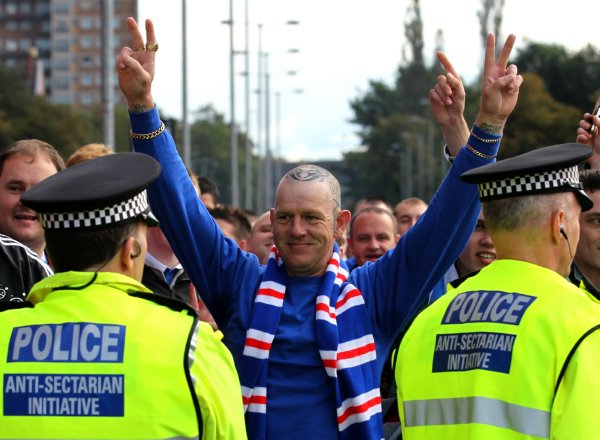 VICE.com have been up in Glasgow filming a documentary – ‘Rivals: Rangers & Celtic’ – on the complexities of the relationship between the two Old Firm clubs and what the future would hold for both sets of fans if Rangers’ financial woes force them down the pan in the near future.

Another turbulent year has seen the government forced into passing the ‘Offensive Behaviour at Football and Threatening Communications Act’ to criminalise sectarian chanting at football matches and Rangers on the brink of being wound up, VICE set about looking at what would happen – other than Celtic’s big ‘jelly and ice cream’ party – to the self-confessed ’90-minute bigots’ if the rivalry and loathing were to disappear.

VICE’s five-part documentary sees impartial English film-maker Kev Kharas tries to get a handle on the political, religious and national identity clashes that have shaped the rivalry – speaking to fanzine editors on both sides of the divide, feared former hooligan firm leaders, anti-sectarian charity workers and Abdul Rafiq; a Rangers fan banned from entering any football stadium for the next five years for singing sectarian chants and, curiously, the only Muslim member of the English Defence League.

Of course, it’s open to criticisms as anything of this fractured nature tends to be, but the final four episodes of the ‘Rivals: Rangers & Celtic’ documentary will be premiered over at VICE.com shortly.

Episode Two (including the interview with Rafiq) is already live and online ready for your perusal.