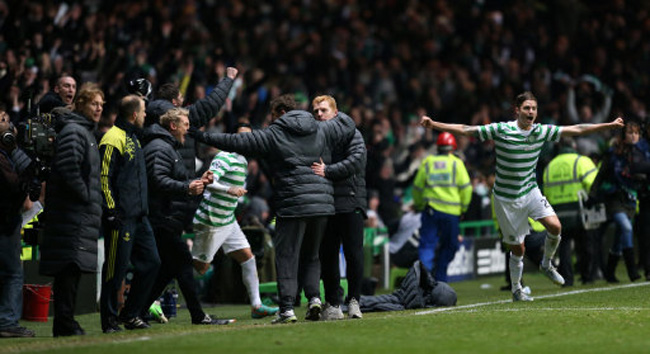 Celtic left it late to secure their passage into the last 16 of the Champions League, with Kris Commons firing home from the penalty spot on 82 minutes to give his side that all important win.

In-form GAry Hooper had initially opened the scoring on 21 minutes at a highly-charged Celtic Park, but Brazilian striker Ari levelled the scores before the break.

With the game and indeed Celtic’s Champions LEague hopes on a knife-edhe, the home side pushed for the winner after the break with Giorgios Samaras and Efe Ambrose both going close. But then as the game neared the final whistle, Samaras was felled in the box and Commons duly fired home from the penalty spot.

Swedish schemer Kim Kallstrom was then sent off after a nasty foul on Commons, which ended the visitors hopes of getting a goal back and that was that.

Hoops boss Neil Lennon was, understandably, ecstatic at the end of the game, with the Bhoys making it to the knockout stages of the competition for the first time since 2008.