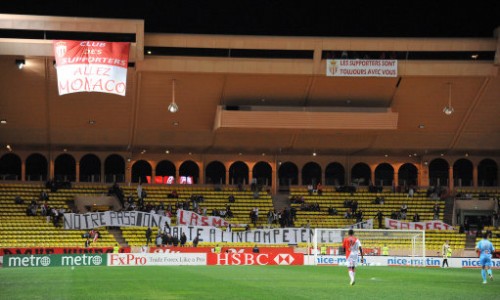 Simmer down you lot

There’s understandable hoo-ha surrounding AS Monaco’s return to the French top tier for 2013/14 given that they’ve spent vast swathes of money in their quest to assemble the world’s biggest collection of Porto alumni, with the likes of Falcao, Joao Moutinho, James Rodriguez and Ricardo Carvalho already moving to the principality for a combined fee of £115 million.

However, for all their humongous cash reserves and nouvelle riche pulling power, Dmitry Rybolovlev’s vanity project will still be forced to start the season at a disadvantage to the rest of Ligue 1, with the French League authorities (LFP) docking the club points for the pitch invasion that followed their final home league match of last season.

Having wrapped up the title, Monaco fans stormed the pitch at the Stade Louis II after the game against Le Mans on May 17th to celebrate their title win and promotion back to the big league…

The LFP have now handed Monaco a three-point penalty, with one suspended, with the club also told they will have to play one game behind closed doors.