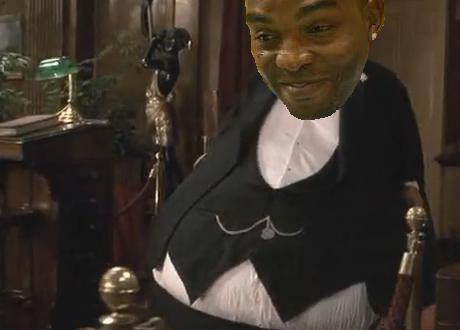 “And finally, monsieur, a wafer–thin mint”

According to this morning’s Daily Mail, West Ham’s portly striker Benni McCarthy has now seen his ‘fat fines’ breach the £200,000 barrier after having his wages docked for a fifth time for failing to meet the club’s 2.2lb weekly weight loss target.

After weighing in at a meaty 15st at the start of ther season, McCarthy was told that he would have to reach 13st 5lb before he would be considered for first-team duties again.

The South African eventually reached his target weight in October, but has now been omitted from West Ham’s 25-man Premier League squad for the remainder of the season over concerns that his body fat count is still on a par with that of a donner kebab.

“He’s a very good player and one of the best finishers in training that I have ever seen, and I have had some good players. But now we need players with movement and the advantage of being quick, and we have others.”

“He wants to play and is not a guy who wants to sit around and collect his cheque.”

Quite right, he’s the kind of guy that wants to sit around and eat chicken nuggets.