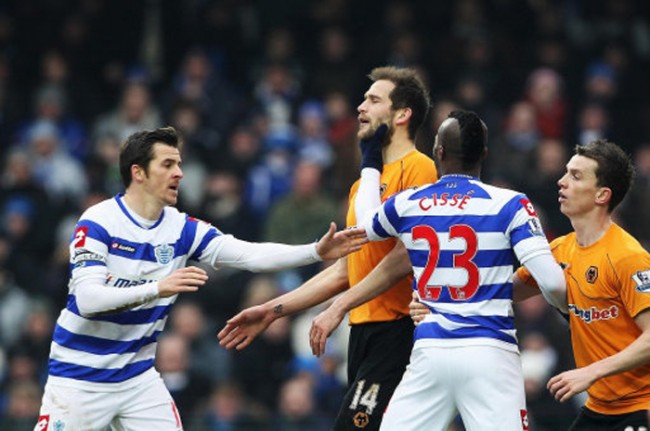 Djibril Cisse could never be described as a shrinking violet, so it will come as little surprise that the former Liverpool man was once again the centre of attention at Loftus Road, albeit for all the wrong reasons. After playing an important part in QPR’s opening goal of the game, the striker then reacted badly to a challenge from Roger Johnson, grabbing the defender by the neck before, predictably, receiving his marching orders from ref Mark Clattenburg.

The home side’s opening goal on 16 minutes was quite superbly constructed, with Cisse feeding Shaun Wright-Phillips, who deftly back-heeled the ball into the path of new-boy Bobby Zamora, who powered the ball home. However, after the Frenchman was sent off, Wolves looked the more likely winners.

Half-time sub Kevin Doyle made an immediate impact, with his cross finding its way to Matt Jarvis who fired home the equaliser in the first minute of the second period. The visitors then pushed for the winner, with both Doyle and Steven Fletcher coming close. However, Wolves’ pressure eventually paid off, with Doyle netting on 71 minutes after good work from Jamie O’Hara.

Rangers did rally in the latter stages of the game, with Adel Taarabt going close, but ultimately it was Mick McCarthy’s side who would take all three points, points which move them out of the bottom three and level with Rangers. Mark Hughes will be well aware of just how easy it will be for his new side to get mired in a relegation battle.

On a less positive note for Wolves, Arsenal loanee Emmanuel Frimpong, who was stretchered off midway through the first half, may well have suffered a serious knee injury.