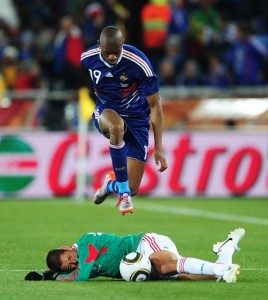 RESULT SA 2-1 France Well at least SA ended with a win and a creditable four points. As for France, let me know what you think in the comments – keep em clean(ish) tho

90mins Three mins of injury time prob won’t go fast enough for either team. One last shot from Midese, just wide but Lloris had it covered. AAAAHHH Tshabalala through on goal and hits it straight at Lloris. Uruguay 1-0 Mexico is a result. Mexico V Aregentina – that could be fun. Free kick to SA – last chance for a blaze of glory. Mpelah – straight into the wall – and it’s over…

88 mins Can’t cry too many tears for France. They have been utterly underwhelming, but sad for SA. They have been fun, but a little too naive to go further. Star players (coughs, Pienaar) haven’t delivered and they have given silly goals away. Who would have thought that France would finish bottom of the group?

85 mins If I were Wenger or Moyes I’d be worried. The Arsenal back three look very lacklustre and as for Pienaar he looks half the player he was in the Prem last season. And Tshabalala gets man of the match. Go on Owen Coyle you know you want him.

83 mins Lovely ball from Pienaar, but Mpelah takes too many touches. BTW Govou has come on for France.

81 mins less than 10 mins to go and the game is fizzling out. The best two team in group A look like they are going to progress and it isn’t SA and France

80 mins Oooh nice Tshabalala has a long range effort. He looks a fine player, wonder if we’ll see him in the Prem next year?

77 mins Would love to see SA score, if only because it would reignite what is becoming quite a dull game. No news from the other game means that SA would need to score three.

75 mins Some nice football from France. Henry, Ribery and Malouda showing their class. Defence still looks a bit iffy though. You can see why Wenger has called time on Gallas’s Arsenal career.

72 mins These are two teams on their way out of the World Cup. Feel v sorry for SA, and I bet they are weeping in Dublin for France.

70 mins Whoops. Malouda scores for France after being set up by Ribery SA 2-1 France. SA now need a couple of quick goals of for Uruguay to come very strong at the end. Not looking good for SA.

65 mins First meaningful move from Henry, and guess what, he handballs it. Ref misses it. Has that happenned before? Tshabalala down, France carry on attack but Ribery is the gentleman who puts the ball out. Tshabalala or Parker will go off,.

62 mins Another chance for Mpelah. Put through by Parker he trips up over his own feet. Still 1-0 to Uruguay in other game. At the moment both Uruguay and Mexico going through.

59 mins Just over half an hour to go and SA need another goal, France starting to look a little more comfortable. Clichy and Ribery starting to combine on the left.

57 mins Great shot from Mphela inspires a great save from Lloris. The French keeper is having a much better half. France’s midfield appears to have gone to sleep now. However Ribery and Henry now look more threatening for France.

56 mins Tshabalala causing mischief in the French penalty area, but can’t create a chance. You feel SA have another goal in them.

54 mins Nice move from France. Decent ball from Sagna to Cisse and the striker hits it just over the bar. It is his last touch too, as on comes the most popular man in Ireland – Thierry Henry.

50 mins Mpelah hits the post – great move from SA. Superb ball from Sibaya splits the defence. Mpelah should have scored. Looks like Henry is going to get a game after all. SA have an injury right back Ngcongca is coming off.

47 mins Going to switch to mins played now. So many French players unrecognisable from their roles for Prem league clubs. But I still think they’ll score. SA’s fate is probably in Suarez’s hands, or rather, feet.

Second half Right to clarify SA have to score twice to go through. Malouda comes on for Gignac. Doesn’t look very much like he fancies it tho

HT punditry – Diaby at fault for first goal. Badly placed tho to be fair, didn’t expect Lloris to miss it. Desailly very scathing of French team. Everyone agrees sending off is very harsh. ‘ You never get luck when you need it,’ says Chiles. Second goal, poor marking by Sagna. If SA do get through they’ll prob face Argentina.

Half time Time for a cup of tea. France are def out, but as for South Africa, well you never know. I wouldn’t bet against them getting a third. ITV playing that French Stella ad – pure class.

3.45 Love to be a fly on the wall in the French dressing room. What will Domonech say? Ribery has been by some distance the most dissappointing player of the tournament. Is this really the man who powered Bayenr to the Champs League final?

3.44 Uruguay have scored, Suarez scores. Shock. South Africa back in the hunt. So, group table has mexico and SA level on goal difference. One more for SA and then they would nab 2nd place. nope that’s wrong, SA still need another, Mexico still ahead.

3.41 Neither side seem capable of keeping the ball for long periods. Mphela has a good shot from distance, Lloris atones for previous errors by turnign it round the post.

3.39 Then Gallas nearly scores. Free kick lands just in front of him and he mistimes his flick. Walters does the rest

3.36 GOALLLL 2-0 to South Africa. Horrible riccochet off Diaby lands next to Mphela who calmly slots it home. Then SA have another goal disallowed for offside. SA really need a Uruguay goal now. Do you beleive in miracles. A nation of Vuvuzela lovers are starting too

3.30 So Cisse is up on its own, Diaby has been pushed a little farther forward. Call me an optimist, but I don’t think this game is over for France. They can still score. A lot hanging now on one Franc Ribery. France playing a lot of long balls now. Don’t forget that in 2002 a french team with Henry, Zidane and a few World Cup winners went out in the group stage. History to repeat itself?

3.28 No hang on it is not Cisse. Gourcouff has gone for an elbow on a SA defender. Bit harsh. France def on the plane home now. The SA defender was Sibaya. For someone of vague French ancestry – they came over from Lille in the sixteenth century – with an Arsenal season ticket that has got very, very painful.

3.26 Cisse off. No really high boot as the French striker tries an over head kick. Really not a sending off offence.

3.25 France suddenly under the kosh. Second corner to SA, Lloris misses it and SA nearly get 2nd. SA’s goal doesn’t affect group position too much. SA still need a goal in Rustenbourg. Hang on, Mexico have hit the post. That wasn’t inthe script. Eeek bad to worse. Mphela waltzes through French defence but puts it wide.

3.20 Guess the Mexico Uruguay score? yep 0-0. South Africa get a corner. GOAL! South Africa go one upl. Poor defending on the back post, Lloris comes early and Khumalo nods it in. Against the run of play SA take the lead. Note to Msieu Wenger – take Lloris off your shopping list. I hear that Rob Green would be a good buy.

3.15 France pushing full backs, Sagna and Clichy well forward, while maintaining a very solid looking central midfield. Diaby def best player on the pitch so far, looks threatening. Oooh corner to France. Wasted by Gourcouff. France getting most of the early posession but doing nothing with it. Cisse offiside (again). Diaby has put several decent ball his way to no avail.

3.10 Cisse already looking like a bit of a passenger. Cisse’s comedy status not helped by the tighest shirt inthe tournament. he has obv been overdoing the Billtong. Diaby bossing the midfield for France. Big question is – if a French player gets injured will Domonech be able to reaplce him. Not a done deal

3.05 Pienaar already getting a good kicking. France look more up for it than you might think. National pride finally kicked in boys? Are you watching England? France gets first corner – comes to nothing

3.00 They are still blowing those blinking Vuvuzelas. This is going to be really fascinating. Off we go. Btw Henry was apparently leader of the plotters, hence the non start. Btw four Arsenal players in the team – is this a good thing?

2.35 remember France are still to score in WC 2010. Also if you haven’t heard this get there – brilliant song about England not being as bad as France

2.30 Apparently Domonech not talking to the players but Thierry Henry is running the show. Remember France need a big win to have any chance of getting through.

2.20 Apparently Domonech is sitting on his own. France’s very own nobby no mates has wreaked a terrible revenge dropping no fewer than six members of his team. Along with Anelka there’s no Evra (Arse’s Clichy comes in, so no real drop in quality there), Florent Malouda, Eric Abidal and Sidney Govou

2.15 Afternoon everyone. Pies first live blog of the tournament comes on the big day for group A. We have the ever hopeful hosts taking on France – a team pulling itself apart. While at the same time the sub plot is provided Uruguay and Mexico who only need to draw to put both South Africa and France out.

Also Patrice Evra, France’s captain, has been dropped, with Alou Diarra coming in as captain

Will Uruguay and Mexico manage a shot on goal at all – or is it going to be a Germany Vs Austria’s gentleman agreement?

Will France have enough players to actually put out a team?

Will the other hand of God – Henry – finally get a game