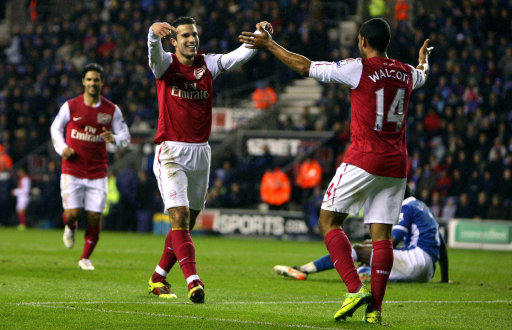 Arsenal moved to within two points of a Champions League place after destroying Roberto Martinez’ struggling Latics at the DW Stadium.

The home side had started the brighter, with the fleet-footed Victor Moses troubling the Gunners’ backline. However, after failing to capitalise on their early dominance, the Latics fell behind on 28 minutes courtesy of a long-range Mikel Arteta strike which the usually reliable Ali Al-Habsi should have stopped.

A minute later the Gunners were 2-0 up after Thomas Vermaelen nodded home a Robin Van Persie corner as the home side crumbled. Gervinho and then Van Persie himself doubled the score after the break to keep the pressure on fourth-placed Chelsea.

While the Gunners look back to something like their best, Wigan, despite the talent in their squad, look in real trouble.