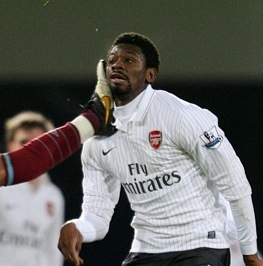 Mini match report: The FA Cup represents by far the Gunners’ best chance of winning silverware this season, but they almost didn’t make it past the plucky Irons – who outplayed the visitors for much of the game – at Upton Park on Sunday. But late goals by Aaron Ramsey and Eduardo earned Wenger’s boys a fourth-round tie against Stoke City.

Check out the best photos from Upton Park below, including some impressively flexible kung-fu action on Abou Diaby (the man who, if memory serves, once famously kung-fu kicked John Terry full in the face):