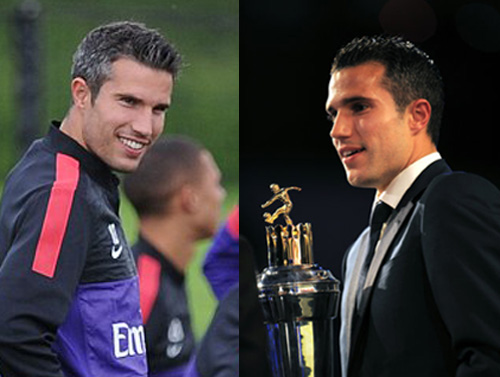 On Tuesday, wantaway Gunner Robin Van Persie returned to Arsenal for pre-season training with the Dutchman’s future still up in the air. After publicly questioning the club’s ambition and stating that he wouldn’t sign a new contract, Van Persie all but burnt his bridges with the north Londoners. However, rumours are growing that he still may perform a U-turn and sign a new deal. Although to be honest, a move to Juventus looks the most likely outcome.

Anyway, seeing Van Persie back with the Gunners, along with a few other players with questions marks over their respetive futures (including Andrei Arshavin and Nicklas Bendtner) will no doubt give some Gooners hope that he will indeed stay.

Although, we here at Pies are more intrigued by his new grey locks. Maybe the stress of leaving Arsenal has prematurely aged the (now) silver fox-in-the-box? Although more likely he’s simply decided to ditch the Grecian 2000?