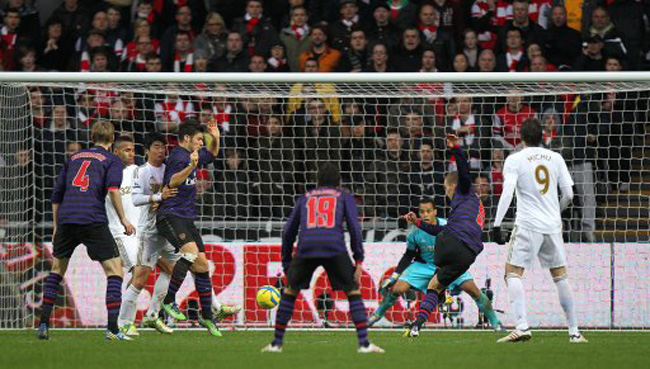 After a rather drab first-half, the second period of this FA Cup tie at the Liberty Stadium certainly came to life, with four goals and a fair amount of drama.

With Michu on the bench, Swansea were still the better side in the first period, with the Gunners struggling to create too much up front.

The introduction of the in-form Spaniard Michu after the break, a man who bagged a brace at the Emirates this season, had the desired effect for the Swans. The attacker was too strong for Arsenal’s limp defence, calmly firing home past Wojcech Szczesny after fending off Per Mertesacker and Laurent Koscielny (and only a minute after he came off the bench).

The goal came after the Gunners had started to threaten the Swansea goal, but the north Londoners kept pushing forward and were eventually rewarded when, on 81 minutes, sub Lukas Podolski turned and fired home to level the scores.

However, with three minutes to go, the Gunners’ backline switched off once again in trademark fashion, with Danny Graham finding himself in acres of space on the far post, before calmly firing past Szczesny.

All in all a draw was a fair result but for Wenger and his assistant Steve Bould, those regular defensive lapses must now be of major concern.