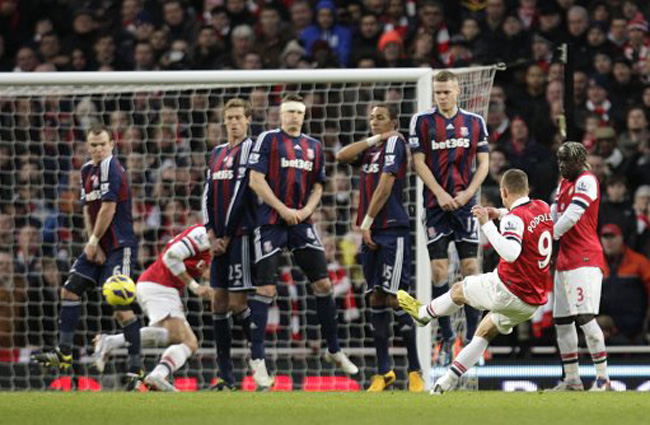 It took a deflected free-kick from sub Lukas Podolski to win a game for Arsenal which they totally dominated from start to finish.

Asmir Begovic was in outstanding form for the Potters from the off, saving from Oxlade-Chamberlain and Koscielyn amongst others as the Gunners pushed for a goal.

After the break, the home side’s dominance continued, with new-boy Nacho Monreal impressing at left-back, but it wasn’t until Arsene Wenger sent on Santi Cazorla and Lukas Podolski that the goal finally came. Andy Wilkinson, who had been kicking lumps out of Theo Walcott all game, was penalised for a foul on the England winger on the edge of the box. Podolski fired home, courtesy of a deflection to give the Gunners a deserved lead.

Ryan Shawcross then was very lucky not to see red, when he lunged with his foot high into Laurent Koscielny while at the death, Michael Owen of all people aimed a punch at Mikel Arteta after a touch but fair tackle from the Spaniard.

However, ultimately the Gunners deserved the three points, which move them to within one point of Everton. Tony Puil’s men, on the other hand, stay 10th.