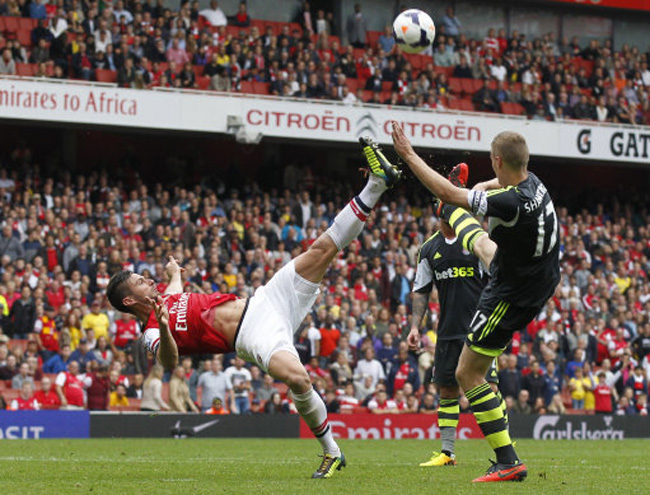 Mark Hughes’ Stoke side produced an impressive display at the Emirates on Sunday, but ultimately it was the home side who would continue to their superb winning streak.

Aaron Ramsey, victim of that infamous Ryan Shawcross challenge in 2010, opened the scoring yet again, netting what was probably the most satisfying of all his goals on six minutes after Mesut Ozil’s free-kick was limply parried by Asmir Begovic. However, the Gunners, with youngster Serge Gnabry in for the injured Theo Walcott, failed to build on that lead and would concede an equaliser on 26 minutes when the impressive Geoff Cameron fired home after Marko Arnautovic had hit the post.

Steven NZonzi was impressing in midfield but the Gunners would tke the lead again before half-time, again from an Ozil set-piece, when his corner was nodded in by fellow countryman Per Mertesacker.

After the break, again the Potters had a lot of the ball but on 72 minutes Bacary Sagna nodded home another Ozil set-piece (this time a free-kick) to secure all three points for the home side.