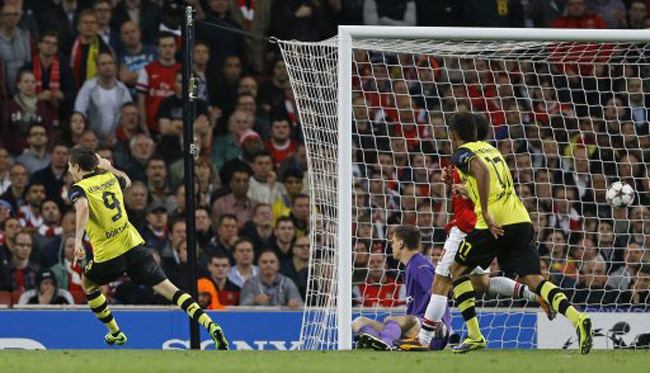 A draw here would probably have been the fairest result, but in the end Dortmund’s counter-attacking ability secured them a vital 2-1 win at the Emirates.

The Gunners started slowly and eventually went behind to a Henrikh Mkhitaryan goal after Aaron Ramsey dawdled on the edge of the box. However, the home side fought back and leveled the scores just before half-time, when Olivier Giroud got on the end of a good Bacary Sagna centre.

After the break, the Gunners started to take control of the game, with sub Santi Cazorla influential but despite having much of the ball, they failed to create too many decent chances and ultimately, it was Dortmund who would score the decider, courtesy of a lovely finish from Robert Lewandowski after a superb counter-attack. Arguably, the Polish striker could have been off the pitch before that, having picked up a yellow for hitting Laurent Koscielny with his elbow, when surely a red card could have been shown.

With Arsenal, Dortmund and Napoli all on six points, the Gunners have a fight on their hands to get out of this group of death. However, they played well enough to secure a draw against Dortmund while a defeat at this stage of the season will give them a helpfull little kick up the bottom after such a good start to the new season.