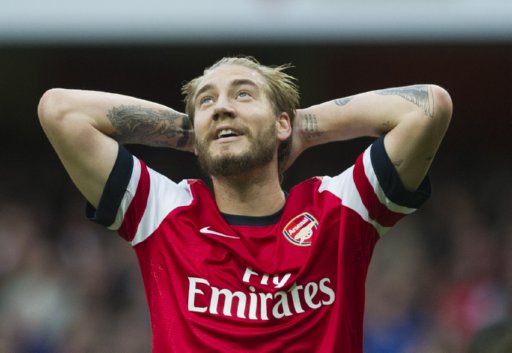 The Great Nicklas Bendtner was arrested on suspicion of criminal damage and warned by police last night after damaging the door to the communal gym at his apartment block when it refused to let him and a gaggle of his friends in for a midnight swim.

According to reports, the door was damaged by a hefty kick and a window was cracked during the Bendtner/inanimate object stand-off, though Hertfordshire Police confirmed that the situation has been dealt and the 25-year-old striker has been let off with a caution.

Bendtner then explained the kerfuffle on his Instagram account, claiming the door jammed and he merely tried to force it open, with any damage being purely accidental:

“On Saturday night after our win against Southampton I went out with my family and friends for dinner. After our dinner we all wanted a night swim in my gym so we changed to shorts and brought towels down.

“As we arrived at the gym my key fob changed the colour from red (locked) to green (open) but the door remained closed.

“We thought the door was stuck so we tried to open it and it caused some damage. I apologise for any inconvenience for my neighbours and I have paid in full.

“We had no part in damaging anything else in the building. The matter is closed with the police, and my focus is on tonight’s match.”