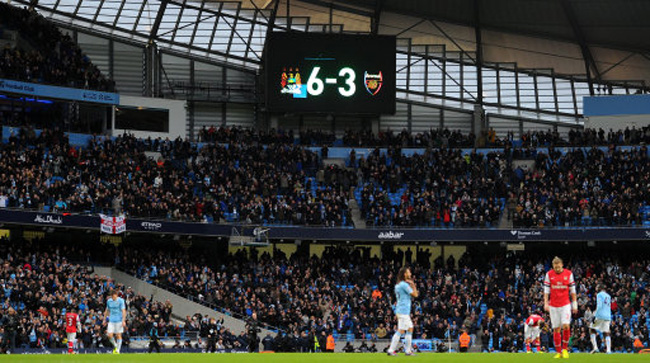 Manchester City produced a superb attacking display  in a rather crazy game at the Etihad to leave league-leaders Arsenal shell-shocked. City’s six goals came via a brace from Fernandinho, one each from Sergio Aguero, Alvaro Negredo, the outstanding David Silva and Yaya Touré (via the penalty spot at the death) as they simply overwhelmed the Gunners’ backline. Theo Walcott did net a tidy brace with Per Mertesacker scoring at the end but overall the visitors looked sluggish and, arguably for the first time this season, defensively ill-disciplined. City’s defending was hardly textbook either but they were magnificent up front throughout the game. Worringly for the Gunners, Laurent Koscielny was subbed off with a nasty gash which will see him sidelined for some time although the sight of Aguero also going off injured is sure to worry Maneul Pellegrini.

Arsene Wenger will rue a number of dreadful refereeing decisions which arguably cost the Gunners a goal or two but overall they looked limp, with Oliver Giroud missing two of three really good chances. However, Arsenal still top the league and the purchase of a top class striker in January may well see them stay in the title race all the way til the bitter end. As for City, they must be favourites for the title now as the goals continue to flow.