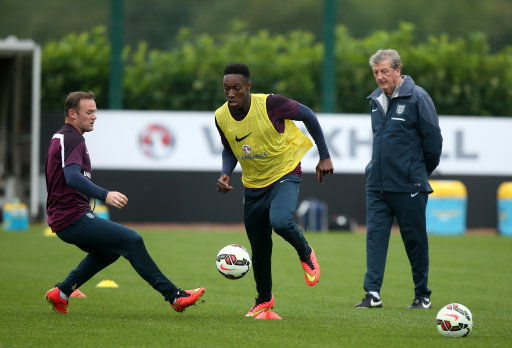 And lo, so it begins. The Arsenal injury train just keeps on a-rollin’.

Signed for £16million on deadline day as an emergency replacement for the injured Olivier Giroud, word is leaking out from the England camp that Danny Welbeck has suffered an injury of his very own while training with England at London Colney yesterday.

Welbeck reportedly rolled an ankle a matter of hours after signing for Arsenal, with England manager Roy Hodgson refusing to state definitively one way or the other whether the knock will rule the striker out of Wednesday night’s friendly against Norway at Wembley.

“Unfortunately in training he did manage to receive a knock in the session,” Hodgson told the Daily Mirror.

“But I have been assured he is okay and that it will not rule him out – but obviously I suppose it could happen.”

The latest word is that Welbeck is going to be left out of the England starting line-up as a precautionary measure, with Hodgson instead opting for a first XI of Joe Hart, John Stones, Phil Jones, Gary Cahill, Leighton Baines, Alex Oxlade-Chamberlain, Jack Wilshere, Jordan Henderson, Raheem Sterling, Daniel Sturridge and his new captain, Wayne Rooney.