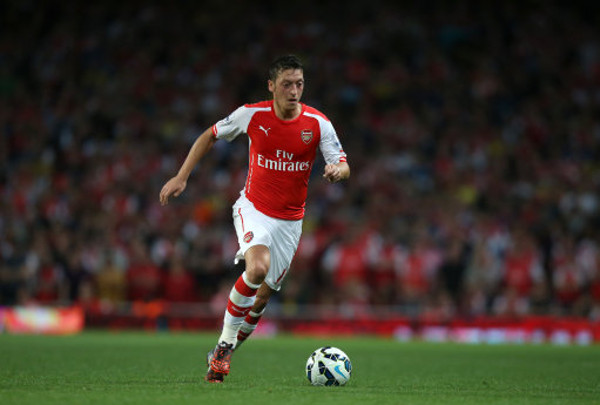 Arsenal fans will have to find something else to endlessly debate for at least the rest of the year after playmaker Mesut Ozil, he who divides opinion in the footballing world like no other, was ruled out of action for up to three months.

According to the German national team medical staff, the former Real Madrid man joined up with the World Cup winners with a partial lateral collateral ligament tear in his left knee – which doesn’t sound very nice at all.

That injury is now set to keep Ozil out of action for up to three months, although knowing Arsenal he probably won’t play again until 2015/16.

There’s another one to add to your chart…

Image @Arsenal of the injuries suffered in the last eight years. A big concern now for the Gunners? pic.twitter.com/G1Km7i4Qf5

The number of injuries Arsenal players have suffered over the years under Arsene Wenger has oft been discussed, but even the addition of German national team fitness expert Shad Forsythe to the Gunners’ set-up in the summer doesn’t seem to have made any difference.

The Gunners are currently without Olivier Giroud, Mathieu Debuchy, Aaron Ramsey, Mikel Arteta, Yaya Sanogo, Serge Gnabry and Theo Walcott (with the latter two almost fit apparently), with not even two months of the season gone,

That’s a mighty big list of casualties but one which Arsenal fans will be well used to by now.

Indeed, only a few days ago, BT Sport produced this graphic which shows how the Gunners suffer by far the most injuries in the top division (with an incredible 40 of those coming courtesy of poor old Abou Diaby!)… 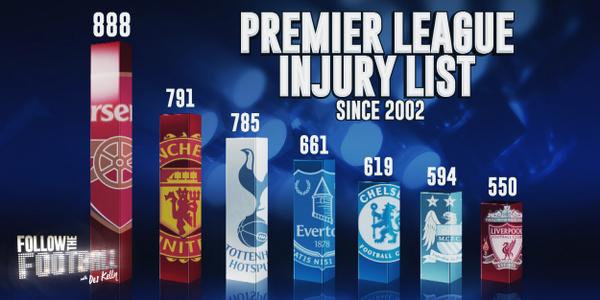 So what’s the deal? Is it Wenger’s training methods which cause such regular long-term injuries? At this point, it’s gone beyond a joke for fans of the north Londoners yet alas nothing seems to be changing.

Although arguably, in Ozil’s case, his lack of presence on the pitch will make little difference to the Gunners’ performances in the near future.

Of course, one other theory is that Arsenal physio Colin Lewin is actually the Harold Shipman of Premier League football…